Saracens go top of the Premiership

Saracens sit on top of the English Women's Premiership with a fine 23-9 victory over early pace setters Richmond. 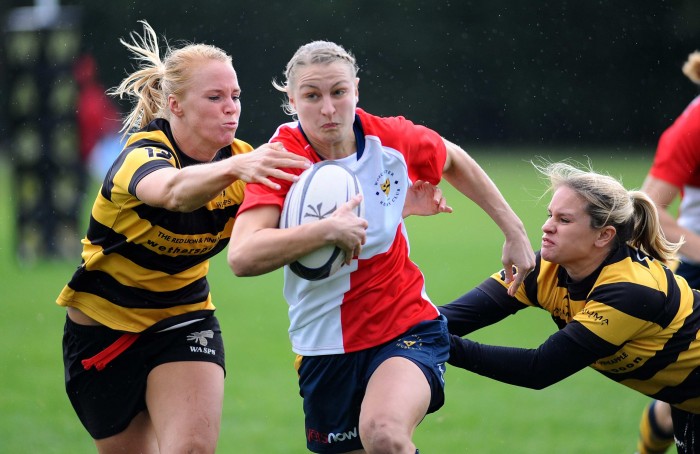 Richmond's first visit to Allianz Park was met with downpours that would have had Noah worried, but it failed to dampen the play. Despite an injury to Alice Richardson in the first minute, Richmond looked comfortable in the difficult conditions and were 6-0 up courtesy of two penalties from Abi Chamberlain before Saracens were able to get to grips with the game.

Repeated Richmond infringements led to a yellow card and the Saracens forwards took advantage with Maggie Alphonsi powering over from close range.  Sarah McKenna converted for a 7-6 lead. Saracens started to show their skill at the breakdown and continued to put pressure on the Richmond line with McKenna slotting an excellent drop goal from the 22 to give them a 10-6 lead at half time.

The second half started with more Saracens pressure on Richmond's line, with the visitors’ scrum looking decidedly out of sorts. This led to the referee awarding Saracens a penalty try, again converted by McKenna, 17-6.

Saracens won a further two penalties which McKenna duly kicked before Chamberlain got one back for Richmond. The last 10 minutes were frantic with numerous turnovers for both sides due to the slippery conditions, but neither could capitalise on their chances making the final score 23-9 with Saracens claiming the top spot in the league courtesy of the victory.

This physical mid table battle finished with the visitors Worcester coming away with a convincing win at Twyford Avenue.

Worcester spent the majority of the first half in Wasps territory and converted their superiority into a strong lead in the first quarter.

However the home side defended desperately as wave upon wave of Worcester pressure kept them on their own goal line. With the penalty count against Wasps mounting, Ceri Large opened Worcester’s account with a penalty on 14 minutes, but the visitors really should have taken advantage of their possession and dominance to score tries.

England wing Lydia Thompson, returning from injury, provided the home side with all sorts of problems through penetrating runs and when Wasps did gain possession, made massive hits to gain turnover ball.

Worcester’s dominance was rewarded when a quick penalty saw the ball worked through the backs for Lisa Campbell to score in style.

The weather worsened in the second half with a considerable downpour of rain which resulted in a disjointed second half with an inevitable increase in handling errors. Following a missed penalty kick Worcester regained the scrum and pushed over for a try by Rochelle Clarke, which converted by Ceri Large put the visitors comfortably ahead at 0-15.

Ten minutes later Worcester’s constant pressure allowed Large to take full advantage of a spilt ball and burst through the defence to score under the posts.

Despite some spirited play from Wasps they never really looked like scoring in this game and despite a tireless performance from Tina Lee and Claire Purdy, Worcester’s well marshalled defence was in no mood to yield.

With DMP Sharks looking to build on a good win against Wasp last weekend, and the Bulls looking to progress on much improved Premiership performances, this clash looked to be close from the outset.

Sharks started well with an early try from Scotland winger Katy Green on the five minute mark, however this seemed to invigorate Aylesford who began making some strong runs and big hits. Both sides’ shared early penalties, with both trying to make their mark in a close first 15 minutes.

Aylesford were unlucky to miss a penalty kick, however they pressured the Sharks line well, with sustained pressure leading to a try for Aylesford number 11 on 20 minutes. With both tries unconverted, the score stayed at 5-5 for much of the rest of the first half, with Sharks also losing 2nd row Sarah Jones to the sin bin for a team offence. On the stroke of half time, some excellent attacking play by the Sharks allowed Ruth Laybourn to score under the posts, and Katy McLean slotted the conversion to make the half time score 12-5.

The second half started strongly for the Bulls, and they scored quickly after an impressive line break by their blind side flanker.

The score was converted well by fly half Flo Williams, and the scores were once again level at 12-12. Back to a full complement of players shortly afterwards, the Sharks kicked into action, and the second half was a stronger affair for the host team.

Centre McLean scored an excellent individual try 10 minutes into the half, followed by a well-created debut try for winger Sophie Lee who found herself on the end of some slick handling. Hooker Charlie Lewis then burrowed through the Bulls defensive line, and the conversion again by McLean took the score out to 29-12.

A clever chip through by fly half Rebecca Scholes then allowed centre Jen Edwards to wrap up the game for the Sharks touching down in the corner to end the game 34-12.

Visitors Lichfield made a strong start to this game with some very good carries by England trio Sarah Hunter, Emily Braund and Vicky Fleetwood.

However great line speed and discipline from Bristol's defence prevented them getting near the try line and the home side forced a number of good turnovers.

Tricky weather conditions meant lots of errors from both sides crept into the match but Bristol then started to put together some good phases, showing patience in attack that hard work culminated in a penalty near the line. A quick tap by England prospect Devon Holt then sent Sasha Acheson crashing over. Bristol gained confidence from the score and built phases again, with midfield players El Snowsill, Rebecca Defilippo and Amber Reed unlocking the defence to good effect.

A second try was scored by Kay Wilson and with Lichfield losing Hunter to injury, the Bristol pack started to dominate. Lichfield held out until Acheson went over for her second try and Bristol then stretched Lichfield with good use of the blind side combined with good hands saw the hard running Acheson grab a hat-trick. Wilson then showed her world class finishing to score in the dying minutes to add a bonus point for Bristol to ensure they bounced back from defeat very positively.