We spoke to Saracens head coach Rob Cain ahead of this weekend's English Premiership Final where his side will defend their title against Richmond. The two leading sides in the English club game will play on Sunday 17th at the Twickenham Stoop at 5.30pm. 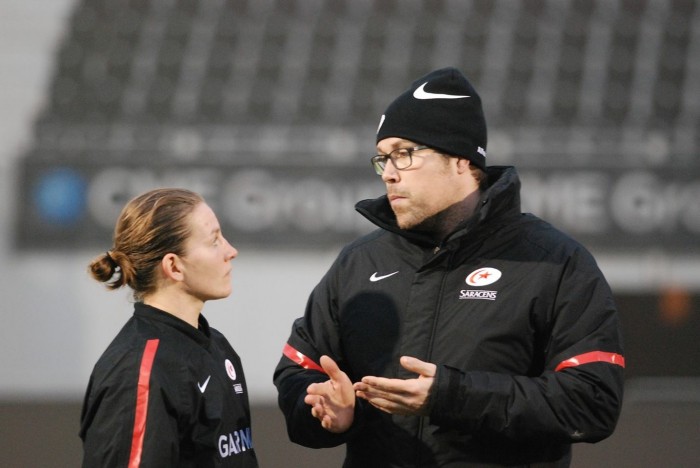 Rob, congrats on reaching the league final. Tell us a bit about your progression this season and how you've reached this point?
Thank you. It was a heroic effort from the players to get through such a tough semi final against a tough Lichfield side. Each week the team has grown and improved in different areas of our game and over the last 6-7 rounds we have found our rhythm. We had a large turnover of players that were involved in last year's title winning campaign. We lost around 15 players who either retired, sustained season ending injuries or were rewarded with 7s contacts with various countries and that meant we all knew we had to work hard to be in a position to defend our title.  As a new team, which we were at the start of the season, it took us a while to find our feet but we have great people at the club and everyone's hard work and efforts have shone through. Each week different players put their hands up and challenge the rest of the team to follow them. Our senior leaders have been fantastic all year not only putting up with me at times, but embedding the Saracens values and ethos to the new players at the club. Our captain Sonia Green has been at the heart of this with her leadership and form outstanding from the get go.

Playing at Allianz Park must be a huge plus - has the hard surface changed your approach to the game?
It's great to be able to train and play at Allianz Park. It's a fanatsic facility that we will never take for granted and I imagine that we would be the envy of many professional men's teams not just other teams throughout the women's league. A lot of the way we play stems from our coaching philosophy at the club and then mixing that with the players who are at the club rather than solely on the playing surface.

You had a hugely successful season last year - what sort of planning goes on to ensure you keep up that consistency?
We had a large turnover of players at the end of last season and to have so many influential players leave at once could have stopped us before we began. We anticipated this and started to prepare for this season's championship during our highly successful  winning cup campaign, with many of the players featuring in that stepping up this year to the demands of premiership rugby. We have inner competition at the club which I believe drives the players forward having to consistently perform at training and on match days because some one is always waiting for their opportunity. Lots and lots of planning goes into what we do as a club with training cycles, session planning, analysis, match preparation etc but without the players buying into it, working hard , trusting us as coaches and us trusting them as players then even with the best planning and preparation it wouldn't work.

The game at Lichfield last weekend was pretty close - what was your assessment of the match?
Semi finals very rarely disappoint and for the neutral this was a great game to watch full of drama and exciting rugby. For the first 45-50 minutes Lichfield dominated the game and threw everything at us. Our defensive effort was huge and even though we didn't have any real ball to work with we still managed to score first and ride through the storm until we managed to get some momentum and eventually edge out a very close game. We were very relaxed at half time and the players responded as we asked them to and when we got some decent ball in the last 35 minutes we played some good rugby and scored two exciting tries. The try to win it was an exceptional chip and catch and we also created 3 or 4 try scoring opportunities but just weren't clinical enough to prevent such a close and edgey finish.  This will set us up well for next week as having such a close fought game allows us to be truly battle hardened going into the final.

There's lots of experience in your side, but also young talent, who are the Saracens players to watch in the years ahead?
We have a very young club. Sonia Green, George Gulliver, April Brown and Hannah Gallagher provide great experience and have all been performing really well this year and out performing their peers. Lottie Clapp and Lauren Cattell made the England squad for the Autumn internationals and are both such exciting prospects with ball in hand. May Campbell at hooker and Poppy Cleall have been in great form and should be in England's thoughts. Prop El Perry is only 18 years old and made her Premiership and senior rugby debut last month but showed what she has to offer after making a massive impact off the bench in the semis.

Without the England 7s players this season, have you noticed any difference in the standard of the Premiership?
Competitions change and develop each year and the premiership too has evolved from last season. I haven't noticed a difference in standard but it would be foolish of me to say that these talented full time professionals would not add to the league or benefit the clubs . This is only my second season in women's rugby and last years first full time sevens programme was a challenge for the players. Their training and match days were limited and this didn't allow them to have such a big impact at club level last year as their own 7s program was evolving.

I think it has allowed clubs greater opportunity to develop depths in Premiership squads, giving players opportunities and allowing them to develop in real time rather than waiting in line at club level. I believe it has tested club coaches to develop players, which is integral to our philosophy at Saracens. We strive to help players improve on and off the field, helping them to develop as people as well as players. I think the domestic league is so competitive and each week any team can beat each other. The final week of the play offs was testament to that with 3 teams looking for the last 2 positions and also the results from last weekend with DMP beating Wasps, Bristol just seeing off Aylesford and we were pushed all the way by Lichfield.

You know Richmond well by this stage - what sort of game are you expecting this weekend?
Tough, confrontational and uncompromising for the full 80 minutes. They have a strong set piece and look to create alot of that and we know how dangerous they can be with go forward ball. You don't top the league by luck and we expect another physical and  exciting encounter.

Does it being on TV add any extra motivation for the girls?
Firstly its great for women's rugby that the final is being shown live on Sky Sports as people can see how strong our domestic game is for themselves,  exposing the public to some great young rugby talent that wouldn't normally get exposure through the media. I know a lot of hard work went into making this happen from the RFU, Sky Sports and the Women's Premiership Group so thank you to all those that made this happen. Richmond vs Saracens. Premiership Final. Both teams having beaten each other during the league campaign. One strike apiece. If any players needed any extra motivation then the game being televised will definitely do this.

See here for ticket details for this weekend's game