After Round Two of England's Tyrrells Premier 15s, defending champions Saracens continue to lead the way. 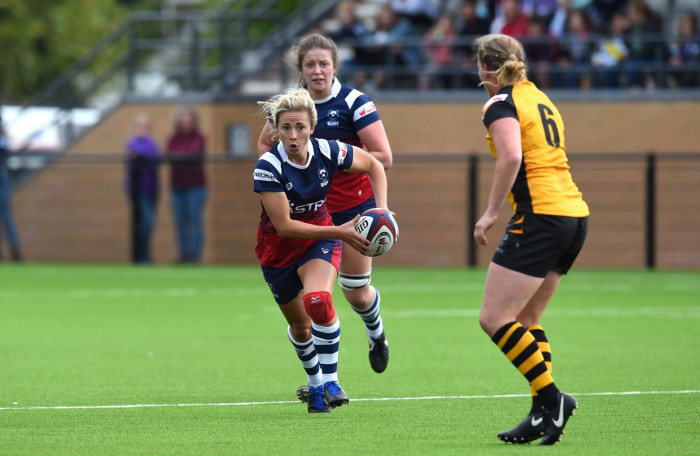 Bristol Bears Women came close to causing an upset against last season’s runners-up Harlequins Ladies at Twickenham Stoop before settling for a share of the spoils.

Lucy Packer grabbed a last-gasp try to take a draw for Harlequins despite having trailed Bristol Bears by 14 points with just five minutes to go.

It was Bristol who were straight out of the blocks when scrum-half Caity Mattinson made the most of hard work from the forwards to cross just four minutes in, with Amber Reed making no mistake with the extras.

Harlequins came level ten minutes later when Chloe Butler squeezed through to score, with Emily Scott converting. But the lead was back with Bristol thanks to Merryn Doidge’s effort in the corner and Reed again converted.

Bristol scored twice more before the break, with Mackenzie Carson then Welsh international Elinor Snowsill going over to put them 26-7 up at half-time.

Davinia Catlin pulled back some points with a try on 48 minutes but it looked as though it wouldn’t be enough for the home side.

That was before England U20 Ellie Green found space to run into and crossed on 76 minutes, converting herself to cut the deficit to seven points.

And they sealed a dramatic draw when Packer crashed over, with Green converting from between the posts.

England international Poppy Cleall crossed for a hat-trick as Saracens Women continued their strong start to the defence of their crown with a 43-7 win over Worcester Valkyries.

Cleall scored twice before the interval, with Valkyries' Zoe Bennion was sin-binned after the half-hour mark, while returning England flanker Marlie Packer also dotted down to make it 19-0 at the break.

In the second half Cleall completed her hat-trick while George Lingham and Nina Vistisen also got their names on the scoresheet with Lindsay O’Donnell scoring a consolation try for Valkyries.

Saracens Head Coach Alex Austerberry said: “If you take the results as standalone events then bonus points in both games is obviously a positive and it is a good feeling to have won both games, but we have to be honest with ourselves and realise there’s a lot to improve on.

“There are certainly some really disappointing elements from (the Worcester game) particularly the breakdown work.

“With that being said we’ve come out with a win and a bonus point but do have lots to learn and lots to work on.”

World Cup-winning fly-half Katy Daley-Mclean has made a fine start to life at Loughborough and after Natasha Jones’ early effort, she ran in a 50-metre interception to make it 14-0.

Abigail Dow, who has burst onto the international scene last season, hit back for Wasps but Lightning and England captain Sarah Hunter led a powerful rolling maul to put her side 21-8 ahead.

After half-time the much-vaunted Wasps backline produced another riposte, the ball going through hands and finding Tova Derk out wide who sniped home to cut the deficit to six.

However, Loughborough’s ascendancy up front was rewarded with a penalty try and while Wasps refused to throw in the towel, Dow running in her second on 70 minutes, two late tries saw the visitors home.

Mary-Ann Gittings led the charge as Gloucester-Hartpury returned with a vengeance with eight different try-scorers this weekend.

It took less than a minute for twice-capped England wing Kelly Smith to get the visitors up and running but Sharks quickly hit back through Beth Blacklock.

The two teams exchanged scores once again, Gittings forcing her way over for Gloucester before Scotland internationals Lisa Thomson’s grubber kick teed up home skipper Heather Kerr to make it 14-14.

Just 19 minutes had elapsed when Gloucester captain Zoe Aldcroft blitzed her way through the Sharks’ defence to dot down before Georgia Bradley bagged the away side’s fourth try of the game.

After the break, Gloucester emphatically pressed the issue home, Tazmin Bricknall and Tatyana Heard both going over before Ellie Underwood and Courtney Gill also got in on the act, Gittings rounding things off late on.

Three tries in nine second half minutes turned things around for Firwood Waterloo Ladies as they emerged from their trip to Richmond with a 24-12 victory.

It was a lively start, with Waterloo holding firm in the opening stages despite Vanessa Temple’s early sin-bin.

And Richmond made the pressure tell 18 minutes in when Vicki Jackson was fed the ball from a lineout, stepped past a tackle and dotted down under the posts, with the extras converted.

But Waterloo staged a quickfire turnaround in the opening minutes of the second half, Lauren Delany scoring twice for Loo with a penalty try sandwiched in-between.

The visitors refused to let off when Laura Perrin collected a kick to score under the posts, the extras putting them 24-7 up.

Richmond responded through Claire Phelps and took the initiative heading into the closing stages but couldn’t break through, and Waterloo held on for a 24-12 win.

Firwood Waterloo Ladies Head Coach Giles Heagerty said: “What has pleased me most is the growth we have shown in the past week to stick to our frameworks and earned the tries we scored.

“It is still very much a work in progress the final quarter was as nerve wracking as I have had. But the girls kept going, and we earned the result. Rob Tilsley deserves a huge pat on the back for the work he has done in our defence, and I must single out Chloe Garner and Laura Perrin for their contributions on both sides of the ball. We still have lots to work on, and now onto Wasps.