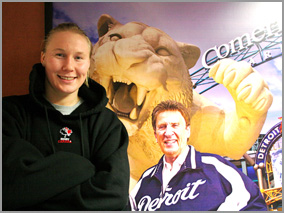 As the Canada womens rugby side build up to their game against the USA in Florida next Tuesday, we talked to Mandy Marchak who has arrived Stateside fresh from brief stint training in London with Premiership champions Saracens. Marchak has spent the past month training with the leading English side following Canadas tour of France in November and she is hoping the experience benefits her in the two test series against the USA.

As the rest of the Canadian womens rugby team boarded their return flights home from France in November after a two test series, Mandy Marchak hopped a one-way flight bound for the UK. Instead of returning to North Vancouver, the city she has called home for the last four years, Marchak opted to spend almost a month in London working on her rugby skills. She stayed with her Canada teammate and captain, Leslie Cripps, and trained with the Saracens, a side becoming notorious for its Canuck connection.

Marchak, who already has quite an extensive rugby resume, was looking to push herself technically in Englands premier competition.

I wanted to gain more knowledge of the game. I found the level [in England] completely different from club level in Canada. Because of the players dedication and higher skill sets even their lower-end players are good it was almost like playing an international match every training.

When she wasnt at the Sarries training ground, she found herself happily crammed onto the Tube, taking in Londons sights.I found a Top 10 Must-See list for London and I probably spent three days a week checking things off; I loved the Tube!

Marchak lists North Vancouver and Capilano as her residence and club, but her roots actually extend into the Prairies. Originally from Winnipeg, a misaddressed email led herto make a gutsy decision that materialized into two World Cup appearances for Canada.

At 19, she packed up and left home for the rugby-rich West Coast so she could train year-round and immerse herself in the sport in hopes of one day making the senior squad.In Canadas U19 and U23 programs, Marchaks explosive power and hard running got her noticed, and she was quickly scooped up by the national team in time for the 2006 World Cup. The experience though left an unfinished feeling for the then 23-year-old who, as an inexperienced player, spent the majority of the tournament on the bench.

As much of an experience [the World Cup] was, it was honestly a bit of a let-down personally. It was an emotional roller coaster, and I ended up not enjoying playing. But it made me want to prove that I was better than that, and could be better and would eventually have a starting spot on the squad.

True to her word, Marchak has done just that since 2006 and is on track to play in her third World Cup before her 26th birthday.Marchak is also a cornerstone of the Canadian 7s team and she helped Canada a fourth place finish at the first ever Womens Sevens World Cup in Dubai last March.

The experience was absolutely amazing. To get the exact same treatment the men got, from the hotel all the way to the crowds, we knew we were the start of something really big. I think it also brought a lot of attention to the fact that womens game is more skilled than a lot of people thought and that we are really exciting to watch.

Rugby has brought the girl from Winnipeg around the world, from Hong Kong to the Bahamas to Dubai, and her passport will most likely get another UK stamp when London hosts the 2010 Womens Rugby World Cup in seven months.

The World Cup season has been a busy one for Canada and this two-test Can-Am competition in Florida will be the third of five events before August.

Canada recently finished fourth at the Nations Cup and split a pair of tests with France in November, including Canadas first win against the third-ranked nation in 11 years.But Marchak says the loss unfortunately overshadowed the enormity of the first test.

France was really hard on the girls. We were all very disappointed with the second match. Florida is really important for us. This time were focusing on our skills as opposed to fitness; we know were fit, but now we really have to focus and rebuild to get our confidence back up.