A powerful first half performance was enough for Saracens to secure back to back Tyrells Premier 15s titles as they beat Harlequins 33-17. 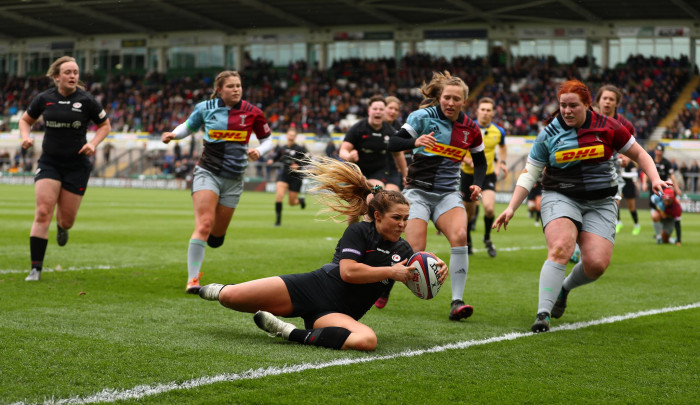 Playing in front of 2,590 fans in Northampton, Saracens were too quick and too strong for their west London rivals in the opening 40 minutes with Zoe Harrison pulling the strings supberly and Poppy Cleall,  Rosie Galligan and Hannah Botterman unstoppable up front.

Saracens were ahead inside three minutes when Cleall dived over from close range. They doubled their score inside 10 minutes when quick hands sent Sydney Gregson in out wide after a fine start from the winger.

A brilliant dummy from Harrison got Sarries' a third on 20 minutes before a second score from Cleall and another show and go from Harrison on the stroke of half-time established a 27-0 lead.

Having barely seen the ball in that first half, where nothing seemed to go their way, Quins were a different team in the second with Scott's move to number 10 and the introduction of Leah Lyons from the bench providing the catalyst for something much stronger performance wise.

Quins got on the scoresheet through Emily Scott's penalty, but Sarries restored their big lead when Harrison slotted over a penalty of her own.

Work from the Quins pack eventually got their first try on 54 minutes through prop Vickii Cornborough and another sustained burst of pressure saw captain Racheal Burford burst over from the back of a ruck.

Just as momentum seemed to be shifting Harlequins' way in the closing stages, Saracens, who beat Quins 24-20 in the final at Ealing Trailfinders last year, closed out the game with Harrison's second penalty in a 18-point haul for her.