Saracens are top of the Women’s Premiership in England this week but only on points difference to Richmond with both sides leading ahead of the race for the league’s semi-finals. Bristol hammered Wasps to cement their position in third while Worcester are fourth thanks to a big win over Aylesford Bulls. 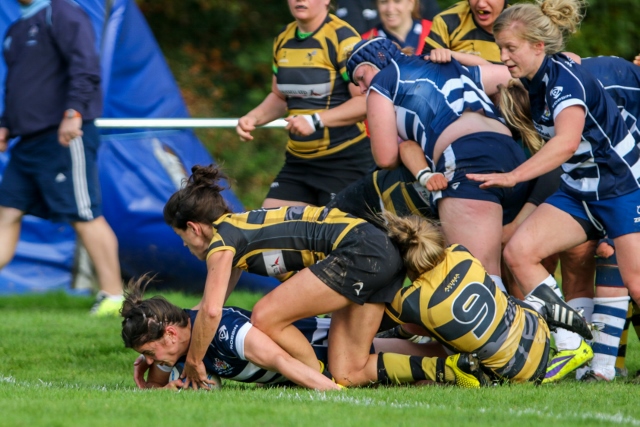 See here for the full table.

Eleven tries and seven conversions saw Bristol coast through this fixture. Sarah Hunter crossed the line within the first five minutes as Bristol’s scrum showed early dominance and then the referee awarded a penalty try after another big shove.  Wasps scored their only points of the game shortly after with a quick tap penalty and quick hands sending Sarah Michelson across the whitewash.

Efforts by Sydney Gregson, Chantelle Meill (2) with two successful conversion by Amber Reed saw Bristol enter the half time break with 29 points, with Wasps being able to cross the Bristol try line just that once.

Bristol maintained the pressure in the second half, with Hunter and then Reed adding to the try total in quick succession. On 53 minutes, Daisy Travers scored her first try in a Bristol shirt, followed by more tries by Claire Molloy, Katie Mason and Olivia Jones, with Chantelle Meill completing her hattrick.

Pic thanks to Rikki Teml

Aylesford battled hard to stay in this game but Worcester pulled away late to secure a very comfortable victory. It took 15 minutes for the first score when Zoe Bennion raced over and when Kelly Smith increased the lead with a dynamic run down the left wing and Benny Williams converted, it looked like game over. Aylesford had different ideas though and their ferocious defence kept the home side at bay until half time and it looked as though Worcester would struggle to get the much needed result.

Aylesford started the second half with intent and it was no real surprise when Sarah Riordan broke through the home defence to score under the posts, Riordan converted her try and it was game on at 12 -7. However the Worcester then turned it around and raced away with thanks to tries from Ceri Large, Lisa Campbell (2), Laura Keates, Bianca Blackburn, Sammy Parker and Rachel Lund (3), whose appearance from the bench along with Abi Walker transformed the game.

View highlights of this game here

Saracens were on the scoresheet early through captain Sonia Green, but strong DMP defence prevented a second try minutes afterwards.  Sam Jameson then got DMP on the score sheet with a penalty but Saracens hit back almost right away when Lotte Clapp ran from the back of a maul to dot down in the right hand corner to make it 10-3. Lauren Cattell showed a great turn of pace to score under the posts for Saracens and Clapp scored her second before half time to put the game beyond reach.

Further tries from Cattell, Carrie Robert and Marcella Collins pushed the lead out and DMP hit back with one score of their own from Fi Davidson.

Richmond kept their unbeaten run going with this strong win away. Emma Croker scored the first try of the match to get the visitors on the board but Lichfield hit back immediately through a penalty from Sarah Nicholas but Richmond pushed further ahead when prop Chloe Edwards crashed over after some good tight work from her pack.

Nicholas kicked two more penalties to reduce the gap to just a point and then Lichfield went ahead thanks to a well worked try. However it didn’t take long for Richmond to strike back when Fiona Fletcher crashed over and then the Richmond lineout was to the fore again with Vik Cornborough crashing over and Abi Chamberlain converting.

Scores from Laura Kapo and Chamberlin converts to extend the lead as well as Alicia McComish meant it was a comfortable win in the end.