Saracens were too good for Exeter Chiefs in the Allianz Premier 15s final, winning 43-21. 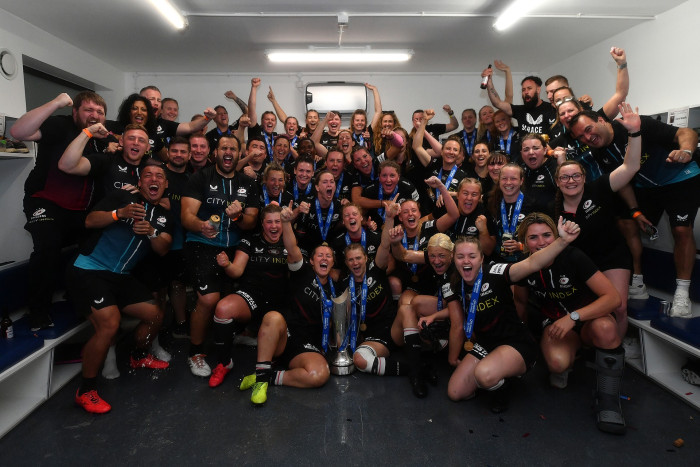 Exeter's appearance in the final was an achivement in itself, given it was just their second season in the top flight - but Saracens were worthy winners.

Exeter started brightly, punching holes in the Saracens 22, but a brilliant defensive turnover from Sarah McKenna early on set the tone for what would turn out to be a difficult afternoon for the Chiefs.

The Saracens pack asserted themselves from the outset, and took just five minutes to get on the scoresheet, with Marlie Packer kick-starting a Player of the Match performance with a powerful carry and score.

Exeter held firm for another 15 minutes, but conceded again when McKenna broke through a gap in the Chiefs defence and Vicky Fleetwood finished expertly a few phases later. Exeter’s riposte came four minutes later through a moment of brilliance from fly-half Patricia Garcia, who tapped a quick penalty and weaved her way over the line for the Chiefs’ first points of the match.

Alev Kelter then extended the gap to 10 points from the tee, before the Saracens pack compounded their dominance, first from a scrum penalty and then a blistering second score from Packer.

Leading 24-7 at the break, Saracens carried on where they left off in the second half and took just 55 seconds to add to the scoreline when Mackenzie Carson sliced through for a fourth try. The Chiefs responded well though, and looked dangerous with the likes of Hope Rogers and Nichola Fryday making valuable metres across the park.

The breakthrough eventually came when Gabby Cantorna snuck through a gap in the Saracens midfield and the Chiefs backline worked the ball to the prolific Jennine Detiveaux, who cruised over to restore a glimmer of hope with 25 minutes left to play. Those hopes were soon extinguished though when May Campbell crashed over to restore a 22-point advantage with just under 20 minutes left to play.

In the 64th minute, Patricia Garcia left the field to a standing ovation as she brought the curtain down on a glittering 14-year career, but Saracens weren’t done yet, and extended their lead further through a brilliant individual score from Alysha Corrigan in the corner.

Of the many positives Saracens will take from today’s match, one of the highlights will surely be the return of Georgia Evans, who came off the bench for the last 20 minutes to complete her recovery from a serious arm injury. The last word went to the Chiefs though, with Ebony Jefferies rounding off a period of pressure in the Saracens 22 by breaking from a ruck and sprinting over in the corner for the final try of the game.

The final whistle sparked rapturous celebrations from the travelling Saracens faithful, with the bench and coaching staff pouring onto the Sixways turf to celebrate with the 15 players on the field. The explosion of emotion at full time was evident to see among the Saracens squad, not least from Marlie Packer, who rounded off a superb season, fittingly, with the Allianz Premier15s title.