Scarratt excited for one of her "favourite" matches

After a 'mad' few days, World Rugby Player of the Year Emily Scarratt, and nominee Katie Daley- McLean, are raring to take on the French challenge as England begin their Autumn internationals in Clermont tomorrow, Bradley West writes. 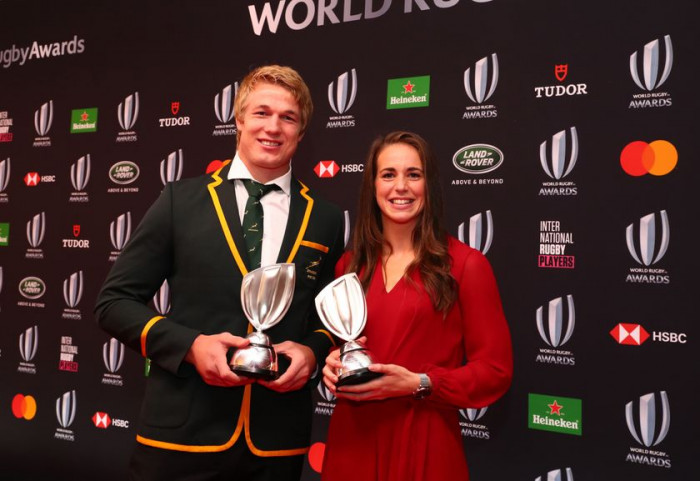 Stade Marcel Michelin is the venue for the first of three Test matches, which will also see England host France at Sandy Park in the return fixture a week later before facing Italy at Bedford, as the Red Roses step up their preparations for next year’s Six Nations.

With the World Cup also rearing into view with less than two years to go, the three Tests represent a barometer for Simon Middleton’s side and a chance to build on what has already been an incredible year.

England have won nine of their ten games in 2019, including notching up a Women’s Six Nations Grand Slam, and currently sit second behind only World Champions New Zealand in the world rankings.

Scarratt, though, knows that France will represent a tough test after two tricky meetings this year which included a dramatic 20-18 Super Series triumph – a game in which the Loughborough Lightning centre starred.

“France away is an amazing test, it’s always one of my favourite matches,” she said.

“They get a great crowd and the atmosphere is always bouncing, they always turn up on home soil so it’ll be a really tough one but a great chance for us to get back on the horse and start the international season well.

“It was really close with France in the Super Series, the Six Nations match was close in a different way.

“We never play France and it’s not a physical challenge, it’s always right up there as one of the toughest games that you’ll have.

“I’m sure they’ll have been disappointed after the game in the Super Series because of how it ended and how the last few minutes went away from them so they’ll be trying to get back at us.”

The fixtures come at the end of a hectic period for the 29-year-old after she was named World Rugby Player of the Year at the World Rugby Awards in Japan on Sunday.

It comes as recognition of an outstanding year where, on her return from playing sevens, Scarratt was a standout player in her four starts during England's victorious Six Nations campaign as well as during their run to second place in this summer’s Super Series.

She added: “It’s been a mad few days. I’ve had an unbelievable amount of messages and support and I don’t think it’s quite sunk in yet but hopefully it will over time.

“The award massively took me by surprise, I kind of assumed the winner would know that they’d won prior to it because that often happens with awards like that.

“If I think back to last season now, I played sevens until Christmas and then was thrown back into the 15s side of it, luckily it went a lot better than my transition last time it happened after Rio. It’s been a very mad season, I’m very grateful for the opportunities we’re awarded now.”

Teammate Katy Daley-Mclean was also on the shortlist for the award, having finished as top points scorer during this year’s Six Nations, and she brings a wealth of experience to the matches as the second most-capped player in the squad.

The 33-year-old former England captain also believes the Italy fixture should not be overlooked and will present a formidable challenge.

“The last time I played in an England shirt was during the Six Nations so it feels like it’s been a very long time,” said Daley-Mclean.

“Italy are very different in terms of their style of play but we know that they were one of our toughest games during the Six Nations.

“They stay in the fight, they don’t give in and they will always keep presenting problems – it’s three very good Autumn games for us.

“My role, being a bit older than most, is about supporting the younger players and giving them experience as quick as possible.”