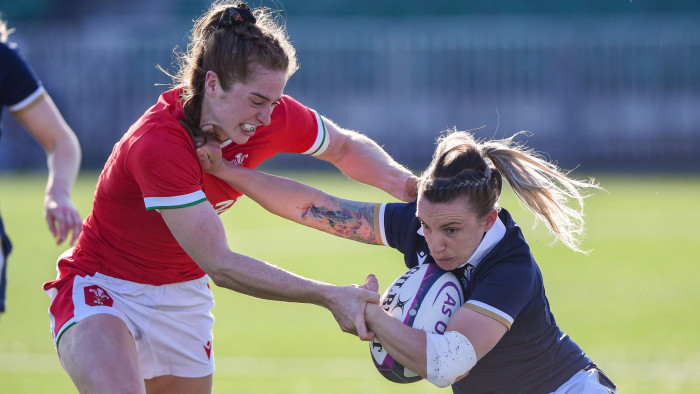 Both sides had something to prove at the end of difficult campaigns and it was Scotland who were on the board first. A well- rehearsed move from lineout was move swiftly through the hands for Gaffney to dot down in the opposite corner.

The Welsh responded well and – aided by a clutch of Scots penalties – got into the scoreboard five minutes later, Robyn Wilkins converting the penalty. She added a second shortly afterwards to put Wales in the lead – but it did not last long.

An error from the restart lead to a Scots penalty, followed by another from resulting scrum. Sent an pinpoint accurate cross-field kick in the direction of Gaffney, who took her side within five metres before Kennedy crash over. Nelson’s conversion made it 12-6 to Scotland.

With five first-half minutes remaining, Belisle added a third try spotting a gap to squeeze over giving Scotland 17-6 lead at the break.

Wales began the second half more strongly than the first and within less than two minutes Lisa Neumann broke through a tackle down the right to score Wales’ first try of the year, superbly converted by Wilkins from near the touchline, bringing Wales back to within three points

Scotland’s pack had been on top throughout the game, and they made the most of that a few minutes later when Wales had no answer to a Scots maul, Evie Gallagher getting the ball down.

Nelson added to extend the Scots lead to 14 points with 10 minutes to play but Wales had the last word, with a second try from the final play, Wilkins again hitting a touchline conversion