Scotland hoping for a better return 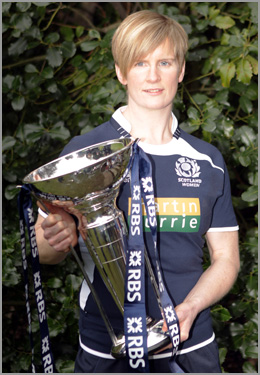 Scotland womens rugby captain Lynne Reid says she is relishing another opportunity to take on France this weekend in the opening 6 Nations game.

Scotland havent beaten France since 2003 and under new coach Gary Parker they are hoping for a reversal in recent fortunes. Reid is named in the backrow this weekend alongside Donna Kennedy, Scotlands most capped player.

Lasswade is the venue for the game this weekend and the ground will also play host to a match between Scotland A Women and France A Women kicking-off at the earlier time of 6pm.

The double-header marks the competitive debut of former Scotland Club International coach, Gary Parker, as he takes over the reins of the Scotland Women's side.

Reid said: I always look forward to the France game. They bring lot of physicality but a flair and natural rugby ability as well. We always approach the game with confidence and thats the same this year.

After a season where Scotland were forced to enter the European Championships to attempt to qualify for the World Cup after a poor 6 Nations campaign, Reid says the extra game time will have stood to her side.

In hindsight gong to the Euros to try and qualify for the World Cup was actually a great opportunity for some of our younger players to try and get out there and play for Scotland and to gain more experience so in some ways it was a very good situation for us. Weve got a new coach now as well, and he is doing great and he brings a lot of enthusiasm, hes a good character and the players are responding very well to him.

With the development of the Scotland A team who beat the British Army last week in a friendly game she believes that Scotland have been improving their depth.

We will see a progression in Scotland I think in terms of depth. There has been a lot of work on developing the game and numbers and that has come on board since we integrated fully as a union and last year for example we had the Scotland A team away in France so in terms of development we are seeing a lot more girls coming through. Next year we want to get age grade levels out there too and bring the levels on even more.

Head coach Gary Parker said that in a short space of time his side have put a huge amount of effort into training.

"There will be a lot of questions asked and answered on Saturday and I am looking forward to seeing how the girls respond at the highest level."

In the lead up to the Six Nations he has been holding international club sessions at Murrayfield on Tuesday nights.

"The sessions are aimed at getting as many people involved at the top level of the sport. Any women playing rugby in Scotland should know they have the opportunity to represent their country."