An impressive all-round Scots performance inflicted the first defeat for a full-strength Spanish team since the 2017 World Cup today when they recorded a 36-12 win at the Juan Rojas Stadium, in Almeria. Spain, who beat Scotland for a place at the 2017 World Cup, will be one of Scotland's main rivals for a place in New Zealand in 2021. 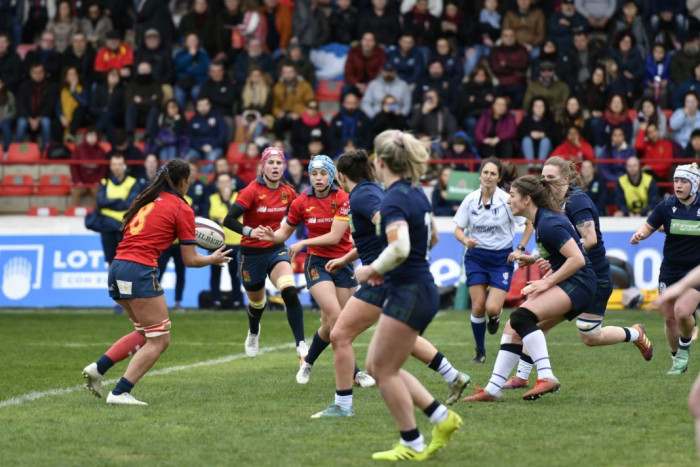 Scotland took the lead in the opening minute. A knock on from Scotland when receiving the kick-off resulted in a scrum to Spain, but the Scots turned the vall over, and Rhona Lloyd made a quick break. Another physical carry from Konkel gave Scotland more distance up the field allowing the backs to work the ball between them. An offload from Thomson to Smith gave Scotland their first try as Smith went crossed the line under the posts to finish it off.

Skipper Helen Nelson successfully converted to give the visitors and early lead.

Straight from the restart, errors were made to allow Scotland to continue with their dominant start. Spain’s were penalised by at the lineout and Scotland took the opportunity for a scrum. The forwards pack put in some strong carries to gain some metres. The whole team put in a great effort to managing to stretch the Italian defence and great the space they needed.

Spain managed an interception from a break from Lisa Thomson but a quick tackle from Megan Gaffney and Evie Tonkin dislodged the ball and Scotland had the chance for a scrum. Again, Scotland worked as a pack and worked the Spanish defence to create a space for Megan Gaffney to dive across the line for the visitors second try of the match.

Spain were now needing to respond well from the restart to get into the game and they did so very well.

Despite a few fumbles, the home side had a good period of possession, but Scotland did not want to make it easy for them. Big tackles from all of the Scots held them back as much as possible.

Spain’s full back, Iera Echebarria, sped through the Scottish line to make serious distance for the hosts.

Once they got close to their try line, Scotland held them there well and made them work hard as Spain fought to keep their possession. They forced a few gaps in their momentum, but eventually the hosts pushed back up to the line and worked the ball over to the corner to score their first try of the match.

Spain took the opportunity to push hard again from the restart. Their forwards put together a very well organised maul, forcing the Scots back about 50m.

Another big push from Spain from another maul as they got closer to the line, really showing the strength in their pack. They forced some errors from Scotland, including repeat warnings about not rolling away. Lana Skeldon received the yellow card and left the field.

Scotland’s smaller pack still managed to hold them back, but the hosts found the gap they needed and crashed over for their second try of the match.

The score was now all even, and the final ten minutes was as well with breaks and errors from both sides.

An opportunity finally came to the visitors following some strong carries from forwards Molly Wright and Jade Konkel. Helen Nelson popped the ball to Hannah Smith who weaved her way through the defenders and finished it off beautifully with a try under the posts.

Second half brought Scotland back up to full strength with Skeldon coming back onto the field. The third try before half-time definitely encouraged the Scots in the opening minutes of the half. They got the ball early on and worked it from side to side across the field.

Both teams enjoyed periods of possession, not giving an opportunity for their opponents to do anything particularly dangerous.

Scotland made serious yards following a kick from Nelson. Spain attempt to boot it back down the field, but Sarah Bonar and Rachel McLachlan of Scotland chases it down. A further chase is needed as the ball rolls towards the try line. Debutant Leah Bartlett gathers the ball and dives over the line.

Scotland do well to hold the Spanish back on their line after a tumultuous few minutes of injuries for the Scots with scrum half Jenny Maxwell and hooker Lana Skeldon both off.

They settled back into their rhythm but were stuck in their 22m for longer than they would have liked. A scrum for the visitors with a break from Smith pushed Scotland back up the field.

They held their possession and maintained the momentum. After a minute or so of working through their phases, the ball is worked along to the right and Rhona Lloyd sprints down and over the line.

Spain were still eager to close the gap though and had some fantastic breaks. One of which saw Lloyd chase back and steal the ball from the opposition. Scotland had the chance to reset.

Scotland brought on some final subs for the match with Alex Wallace coming on for her debut as well as Belisle, Muzambe and Denholm, relieving some of the standout players like Hannah Smith.

Into the final five minutes of the match and Scotland made the most of a lineout about 10 metres out to push hard on a driving maul. Debutant Molly Wright crossed the line carrying the ball for Scotland in a clinical finish for the forwards pack.

Into the final minutes and the pressure was on for Scotland to keep calm and have hands on the ball as much as possible. Despite a few challenges thrown their way, the managed it and Lisa Thomson kicks the ball to touch as the whistle blew full-time.

Scotland Head Coach Philip Doyle said on the win: “I am elated, I am so, so happy with the team and the way they performed. They had dig themselves out of some holes at certain stages in that match but there are so many positives to take out of the match.”

“We had two first cappers score on their first matches and credit to the forwards pack for turning over scrum twice. The backs had a field day, Hannah out in the centre was a serious threat in the game.”

Spain now move into the Rugby Europe Women's XV Championship , which will be held in April and which they must win to qualify to the European World Cup qualifier. Although with this defeat means Spain lose points in the World Rugby ranking (which will decide the semi-final draw in the qualifier), Spain should remain above Ireland and Scotland.