Scots trio on form as Top 8 kicks off

There were no surprises in the first round of the French Top 8 last weekend, as the Scottish trio of Jade Konkel, Lisa Thomson and Chloe Rollie made their debuts for Lille 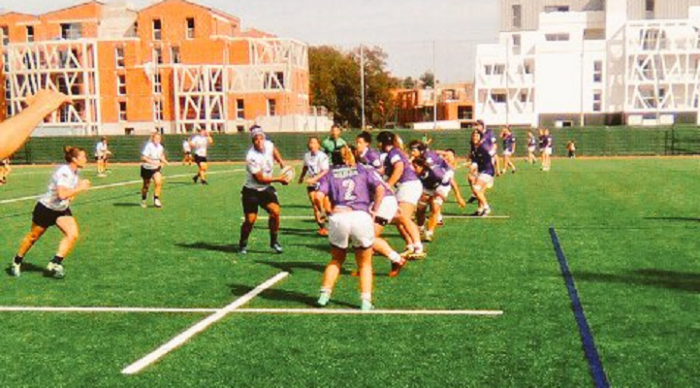 Montpellier successfully battle to hold their lead in Bayonne

As is traditional with the first weekend of the Top 8, the top four teams (based on last year’s rankings) travelled to the bottom four.

As a result the newly-promoted team tends to get a baptism of fire by hosting the current national champions, but AS Bayonne – with several internationals in their team - were certainly not outclassed by Montpellier, opening the scoring after 15 minutes though one of their internationals, scrumhalf Pauline Bourdon.

However, five minutes later her opposite number Jennifer Troncy levelled the score, and with Morgane Peyronnet on target with the boot Montpellier were in a lead that maintained to the end. Tries either side of halftime by Marie Vanthournout put the champions well ahead, but not too comfortably after Eva Robquin narrowed the lead to 19-10 on 68 minutes with a second try for the newcomers.

Lille, with the Scottish trio of Jade Konkel, Lisa Thomson and Chloe Rollie, travelled to Clermont to take on Romagnat and returned with the only attacking bonus point of the day, with the Scots having a hand in each of the first three Lille tries.

First blood went to the opposition, but within minutes Jade Konkel – with the support of the Lille pack – had replied. Gina Di Muzio then touched down to put the visitors ahead, set up by Lisa Thomson, and Alexandra Pertus completed a three-try first half following a break by Chloé Rollie ,supported by Laetitia Estève. In the second half the northerners ensure their attacking bonus with tries from Yanna Rivoalen and Gabrielle Vernier.

Stade Rennais – with Jessy Tremouliere joining the club – welcomed Toulouse for what proved to be a closely fought encounter. Caroline Boudard’s try for the visitors after 32 minutes was all that separated the teams at half time. Rennes narrowed the score with a penalty shortly after the break, and were going for the winning try in the final minutes when an interception won the game for Toulouse. Jade le Pesq finally crossed the line for a consolation try shortly afterwards, which allowed the home team a losing bonus point.

In the final game of the day was also the closest, with Blagnac travelling to Paris to take on Bobigny, and holding onto a narrow 10-7 halftime lead to come away with a 16-13 win.