England were too strong for Wales at U20 women's rugby level today at the Surrey Sports Park in Guildford as the home team scored three tries in a 17-7 victory . 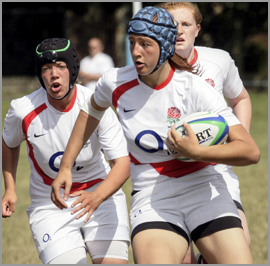 England, captained by Charlotte Male had lost their first game of the year a few weeks back in France but were dominant in the second half to ensure they got back to winning ways. Welwyn fly half Emily Scott was England's star, scoring two tries and adding a conversion.

Wales were the team dominant in the first half however and they led the match 7-5 at the break. England scored first when a nice break from centre Rose Fong game her side good territory and although Wales later overturned England, the home side regained possession when the ball went loose and Worcester lock Amy Millar picked up on the left wing and ran in to score. Scott couldn't make the conversion.

Wales soon had their chance, however, to draw level and they did just that when scrum half Yasmin Leung got the ball out to full back Kerin Lake from a solid Welsh scrum. A good pass from Lake then saw prop Alex Stokes muscle her way over the try line to touch down. Leung added the conversion to take a 7-5 lead at the break, though they were unlucky not to go further ahead when a late barrage of attack in the first half saw the visitors come close to scoring.

England, however, made a tremendous start to the second half with some good early pressure which paid off. England earned the territory and then took a good attacking line-out ten metres out. Fly-half Scott took it on, and then cut a great line through the midfield to run in unopposed and score. With Scott converting her own try England took the lead back 12-7.

Scott was back on the score sheet again with England really asserting their dominance in the second half. Another good break by Fong gave England territory. With Wales then penalised England took a quick tap penalty which saw Scott take on the ball on the right wing and score. Scott this time couldn't make the conversion but England had established a 17-7 lead.

England Under 20s Coach Kevin Moggridge said: "I am really pleased with this victory. We gave the players five key areas to work on; to be more clinical in defence and more organised, to be more aggressive at the breakdown, to get the ball out into the wider channels and to maintain contact and presentation skills and I think they achieved all of those.

Substitutions: Gallagher for Acheson (62), Wild for Short, Wild for Ceall (68), Watkiss for Scott , Wilson Hardy for Hughes (both 76), McClarnon for Male (77), Jay for Davidson, Gallagher for Fong (Both 80)