After a round of public voting to narrow down the choices, we pick our top players, coaches. teams and administrators of 2019. 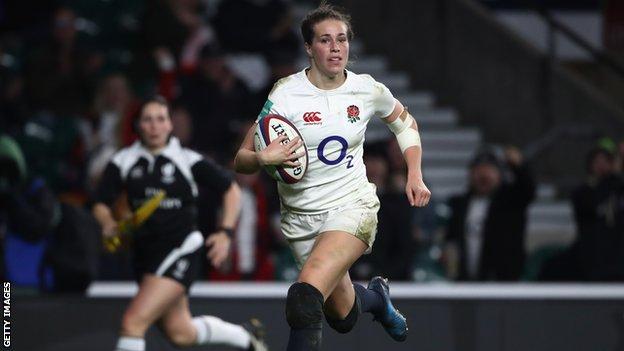 Since returning fully to the 15s game and leaving her 7s career behind earlier this year, the long-time star England centre has looked like she was never away. A brilliant 2019 saw her play an instrumental role in England’s 6 Nations campaign, scoring two tries against Scotland at Twickenham helping her side to win the title and being a tower of strength througout in England's midfield.  She was superb in the Super Series this summer - particularly against France where she scored two tries and a penalty to help her side win 20-18. and she ended the tournament as the top try scorer.  In England's Autumn campaign, she scored her 500th point for her country in the win over France in Exeter to help round of a fine 12 months.  It’s hard to believe that Scarratt, who has achieved so much in the game is just 2019, and surely many more accolades still await.

Despite a poor end to the year, Italy’s head coach deserves serious recognition for coaching his side to second place in the 6 Nations this year . With scant resources, including playing numbers, Di Giandomenico has been a stalwart at the helm of the Italian side and he has displayed significant skill and leadership to take his team from perennial bottom of the table dwellers to a side which this year beat France, Ireland and Scotland and drew with Wales and Japan. The 31-12 win over France was a particular highlight - Italy having gone into the game with only an outside chance of finishing second. Popular amongst his player and well respected within the Italian game, Di Giandomenico has built his squad around a core of key players and if he can keep his best players fit, Italy could head to the next World Cup in their best shape ever.

Prior to the November 2018 Czechia were rooted to the bottom of the world rankings. Some 14 years after their test debut they had never won a test. As a result 2019 has been all the more astonishing because they won every test match they have played, resulting (thanks to a quirk in the fixture calendar) in two Rugby Europe Trophy wins, the 2018-19 tournament in the spring, and then the 2019-20 competition in the autumn. They were 2019’s only unbeaten international XVs team.

Their first test win in Switzerland in November 2018 resulted in all Czech teams playing with growing confidence, head coach Hana Schlangerova coaching the U18s to a top 8 finish in their first tournament, while the sevens team narrowly missed promotion to the Grand Prix.

Captain Petra Křiklánová modestly admits that they have some way to go before they can be fully competitive at the next level, but in any year a team can only beat the opposition put in front of them and in that in 2019 Czechia were faultless. Given where they had come from Czechia had an unparalleled year and fully deserve to be out XV Team of the Year..

This was the selection that was by far the hardest of 2019, but in the end we had to agree with World Rugby's selection of Ruby Tui in their awards, especially after her performance in Dubai (which was technically outside of consideration for World Rugby awards, which were for the 2018/19 season). Tui was one of a handful of players to appear in three Dream Teams in 2019, her power and speed and consistency (she was in the starting team for just about every game in 2019) inspiring her teammates to achieve the heights that saw the Ferns start and end the year on top of the World Series..

In his first season as head coach of the USA women’s 7s side, Brown led his side to their best season ever. Their top finish in the series prior to this year was fourth, and they had never reached the podium at more than one tournament in any single season.  In the second half of the 2018/19 season, the USA won five medals in six tournaments, and their first gold, and finished second place overall behind New Zealand.  They won bronze in Dubai and look a different and more finely tuned team under Brown’s leadership.

The world champion Black Ferns claimed their fifth World Series crown this year, though at the mid point in the year it looked like that crown might have slipped as the United States won two successive rounds, including back to back wins over the Ferns - something that only Australia had ever previously achieved. But between Glendale and Dubai the Ferns regrouped and came roaring back to win both the Dubai and Cape Town rounds to end the year as they started it. At the top.

And perhaps it is that ability to recover and readjust, more than anything else, makes them the best sevens team of 2019 (and pretty much any other year). Australia or the USA or most recently France look like they might have found an answer to the Ferns domination of the format. They may win a match or even a tournament or two, but the Ferns always come back giving their opponents a whole new puzzle to solve.

The Young Player category resulted in some of the most diverse nominations, over a dozen names being put forward from more than 10 different countries. All of our nominees made a major impact on the game having started their careers at clubs or schools but only one began after forming her own team.

From Barh in Bihar, north east India, Sweety was an athlete with no knowledge about rugby until the secretary of the state rugby association saw her at an athletics meeting and suggested that she try out rugby. Just 14 she single-mindedly found out all she could about the game, created and organised a team, and entered the state championship. Within three years she was in the national U17 team, and last year the senior national team.

She impressed from the start but it was this year that she started making a big impact scene in Asia at both sevens and fifteens. Described by Asia Rugby as the continent's fastest player, her explosive pace and power has resulted in her top scoring at most of India’s sevens tournaments, as well as scoring two outstanding tries their first ever test match win against Singapore.

India’s hopes of playing outside Asia appear limited with at least half a dozen better resourced and more experienced nations competing for Asia’s one or two spots in world tournaments so we may be a long time before we see Kumari pit her speed against the likes Portia Woodman or Ellia Green, but if any one player can take her team to a higher level its Kumari.

The former Ireland number 8 has quickly become a world-class referee and this year she continued her brilliant form with the whistle. Neville has a fantastic empathy with players but marries her style with authority that is rarely questioned on the field. This year she was outstanding in the middle for women’s test games, U20 men’s test games and she has also shown this year that she is not afraid to admit when she gets it wrong as is evidenced so well here

Eleanor Wilkinson may just be 18 but the university student is already proving to be one of the busiest volunteers in the game. A coach and referee who is passionate about sharing her love of rugby. She began playing at the age of 12, qualified as a referee at 14 and completed her RFU level 2 coaching award at 16. She referees at least twice a week for the Leicestershire Society, currently coaches and plays at Loughborough Town and recently for Leicestershire U15 girls and worked as a didi rugby coach before commencing her studies at Nottingham Trent University. Highlights of her referee career so far include officiating at a match where one of the players was a childhood hero and also the inaugural match for the England Women's Fire Service team

Former Black Fern Vania Wolfgramm is based in Auckland and has been a Women’s Rugby Development Manager at NZR since 2012. She has a particular focus on growing rugby in the northern part of New Zealand - particularly Pacific Island and Māori girls - and developing initiatives that can be rolled out across New Zealand. Among the programmes she has developed is the Pasifika Aotearoa Cup, which was used to help win the bid to host the 2021 Rugby World Cup. What began with four teams – Samoa, Tonga, Cook Islands and Māori – in 2013, has evolved to 50 teams from schools, clubs and culture groups. She recently took part in a global sports mentoring programme run by the US Department of State and espnW and has a vision of developing a facility in south Auckland, to identify talent.

Tomorrow we post our XV and 7s player by player Teams of 2019.