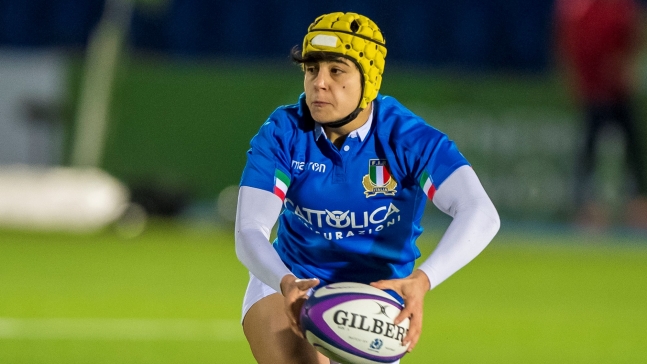 Our biggest debating point is always our Teams of the Year - but after a good deal of debate over the many nominations received here is the result.

One matter of note - perhaps a sign of the times - is that for the first time we did not have to envoke the rule that the same player cannot appear in both squads. There were very few names put forward for both the 15s and 7s teams, and none appeared in both of our inifial selections. Are we moving to a world of separate test and sevens specialists?

1 Lise Arricastre (France)
The France prop was a bedrock of strength in the games where the French pack dominated in the 6 Nations and she carried on her form into the summer, where France once again beat New Zealand and came close to beating England this Autumn.
2 Caroline Thomas (France)
Thomas was brilliant for France this year, grabbing hatricks, driving the French maul forward at a rate of knots at time, and proving a pillar of consistency throughout the year.
3 Sarah Bern (England)
England's young prop just gets better and better. One of the game's few front rows who can get the crowd on their feet with barnstorming runs, she also continues to develop her scrummaging and is now a shoo-in on the England team sheet.
4 Lenaig Corson (France)
The French lock is powerful but does all the things you expect of a lock brilliantly. Vital in the set-piece, she is also a fine link player for France, with excellent passing ability.
5 Abbie Scott (England)
Scott was one of the key players to have helped England win the Women’s Six Nations Grand Slam, scoring tries against Wales and Italy. In June, she was named in Simon Middleton’s Super Series squad and captained the side in their opening match against the USA. A coming force in the game.
6 Giado Franco (Italy)
No longer a newcomer to the test arena, Franco continues to lead the charge for Italy with her poweful running and tough tackling. She was a key cog in Italy's success earlier this year and has made the move to Harlequins in a switch that will only bring her on.
7 Claire Molloy (Ireland)
Ireland's brilliant openside is taking a break from the international game but bowed out with several battling performances in a difficult Six Nations for her country.  Probably the one Irish player who would make it into any international side right now.
8 Charmaine McMenamin (New Zealand)
The game is blessed with brilliant number 8s at the moment but McMenamin took her game to the next level in 2020. Starting every test this year, McMenamin was a powerhouse with ball in hand and a titan on defence as the reigning world champions won all but one of their matches. She was named the Black Ferns Player of the Year.
9 Kendra Cocksedge (New Zealand)
The New Zealand scrum-half has developed into one of the very best to have worn the 9 shirt for her country. Her leadership, kicking and brilliant game management was once again evident this season in her side's six tests and she beats off Pauline Bourdon to the spot.
10 Katy Daley-Mclean (England)
It is a sign of her consistency that there is rarely a contender in this position to threaten Mclean's dominance every year. Does so much right for England and continues to be one of the best players and leaders in the women's game. There is still plenty to come too.
11 Ayesha Leti-l’iga (New Zealand)
The Wellington youngster has had a brilliant year, making 483 metres in the black jersey in the six Tests she played this year, beating 25 defenders and making 61 carries. This powerful winger also topped the table for the most tries in the Farah Palmer Cup competition, bagging 12 tries and will be a force for years to come.
12 Beatrice Rigoni (Italy)
So often the unsung hero for Italy, Italy's most dependable player is a glue in the centre for her team and has been for years.  A strong kicker, powerful tackler and a player who hits great lines, she was often the player to come up with crucial scores this season. Deserves to be part of an Italian team which is now climbing the ranks.
13 Emily Scarratt (England)
It's been a great year for this great player. At the highest level, Scarratt has long been able to do it all - goal kick, score brilliant tries and act as a defensive glue in England's mid-field. This year, having made the permanent switch from 7s she was superb in England's 6 Nations, summer and Autumn campaign.
14 Caroline Boujard (France)
The pacey French back three player has been in very good form this year. Brilliant in particular against Ireland earlier in the 6 Nations, she has speed, footwork and great finishing skills and beats some great players to this position. She has emerged as one of the true French backline stars.
15 Elissa Alarie (Canada)
Canada's verstaile back has long been a key player for her national side and she was excellent this year, particulalry throughout the summer. With great pace and finishing skills, Alarie is one of the smartest players in the game and can hit great lines to bamboozle defences. She was superb against New Zealand in particular.

Selecting the sevens squad was unusually tough this year with so many possible selections, but very few outright automatic picks. This was reflected in World Rugby's "Dream Teams" where throughout the year it was rare for a player to appear in the team for successive tournaments, and over the six rounds played in 2019 no-one appeared in more than three. Nominations reflected this with multiple different names and no clear winners.

But after much agonising we have arrived with the following squad – but perhaps another dozen players could narrowly missed out. This year it contains four New Zealanders and Australians, three from the United States, and one from Canada.