Scrumqueens.com - XV Team of the Decade

Every year since 2009, we have chosen at Scrumqueens.com Team of the Year. Now, to celebrate our 10th anniversary we bring you our team of the decade. Join in the conversation on Twitter! 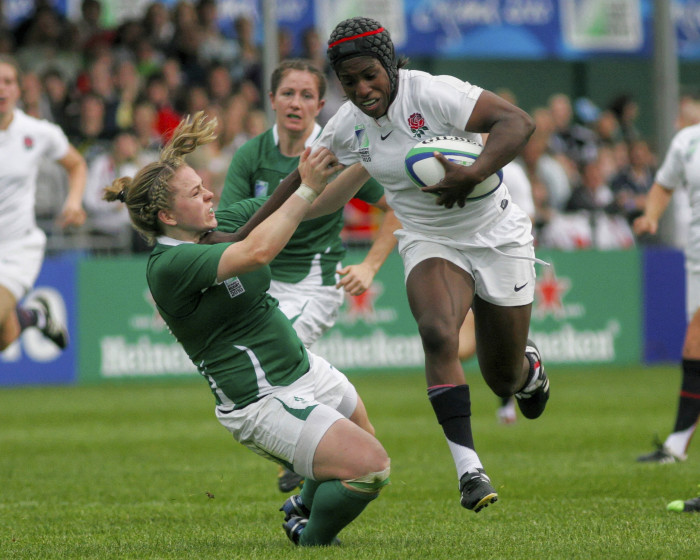 Gathering an initial list was very easy. We looked at all the players over the last 10 years who had made our end of season team, excluded players who would be included in our 7s team of the decade and debated those who were just clearly so outstanding, that they were nailed on inclusions.

Whittling it down to 23 and then 15 however was much harder especially  given the versatility of women's players - many who appear across a range of positions in their career.

There is also the sheer dominance of England who played more test games than anyone else over the past decade and of course New Zealand, who won two World Cups in this period and those factors are reflected in our selection.
Choosing this team has been a huge challenge and in the end many great players miss out  - so who did make the cut?
In the end our 23 includes 7 players from England, 6 from New Zealand, 4 from France, 3 from Ireland, 2 from Canada and 1 from the USA.

In the front row, Rochelle Clark, the 137 times capped England prop was a 'must include'. Clark is the most capped women's rugby player in the world and was vital to England's fortunes over numerous 6 Nations wins and the 2014 World Cup.

Alongside her at hooker is inspirational New Zealand captain Fiao’o Faamausili. Back out of retirement, the Black Fern has been a tour de force in the front row for her country, leading them to two World Cup titles in the past ten years and having proved an outstanding player and ambassador for the game.

On the other side of the scrum is one of the younger guns Sarah Bern - but such has been her impact since she debuted in 2016 that it was impossible to leave her out. She has been sensational and is already on her way to becoming one of the best test props the women's game has ever seen.

In the second row the formidable pairing of Rawinia Everitt and Safi N'Diaye are included.  Everitt is a hugely talented athlete and shone in the New Zealand second row for years following her debut in 2011, while Safi N'Diaye has consistently been one of the best players in Europe and a nightmare for defences - she has moved recently from the backrow to the second row.

The backrow was the hardest area of all to chose with some outstanding players missing out. The combination of Karen Paquin,  Maggie Alphonsi and Sarah Hunter is surely difficult to argue with.

Paquin is a versatile player with searing pace who is a joy to watch in full flight and was brilliant as part of the 2014 World Cup final team.  Alphonsi was the face of the England women's rugby team at their home World Cup in 2010 and was a vital part of the 2014 World Cup winning team. An incredible tackler, she was a nightmare for opposition fly-halves and an outstanding voice for the sport. And the now England captain Sarah Hunter has been consistently one of the best players in the English team and has been the backbone of so many successful games and tournaments that she had to be in the team.

There were some obvious choices in the backs.

Kendra Cocksedge and Katy Daley-Mclean were nailed on starters having been two of the most influential players in the women's game over the past ten years - and both continue to be leading lights. In the middle we had to include the hugely talented Kelly Brazier alongside England's Emily Scarratt - two of the best centres the women's game has seen and two players who have flicked between 7s and 15s over the past 10 years with great success.

The back three includes Nolli Waterman - the brilliant England fullback moved to the wing to accommodate Ireland's Niamh Briggs, who is not involved with her national team any more but was instrumental in Ireland's two Six Nations win and their excellent 2014 World Cup.

We chose her Irish colleague Alison Miller on the wing who has been one of the toughest and most hard working players in Europe since her debut in 2010.

On the bench we try and squeeze in as many of the plethora of brilliant players we left out as possible, including Jessy Tremouliere, our very first Young Player of the Year back in 2011.

Scrumqueens.com Team of the Decade