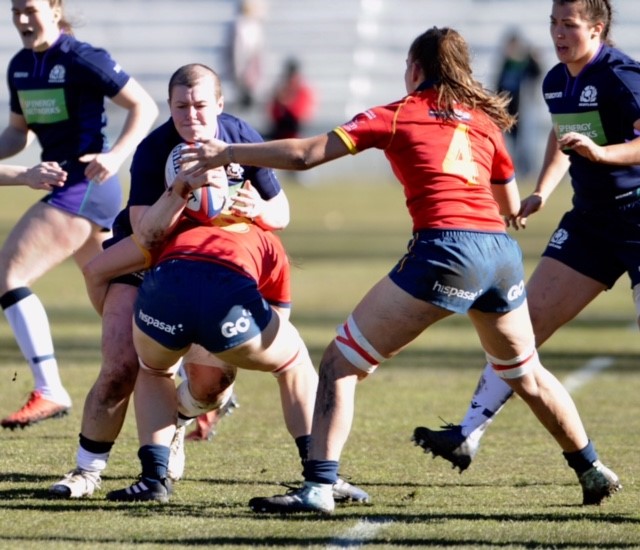 The visitors were 12-10 up at the break and then went 17-10 ahead in the 47th minute, but Spain came roaring back and three tries put them into a lead which they did not relinquish.

Spain No.8 Maria Losada went over for the opening try in the sixth minute.

Stand-off Helen Nelson missed a penalty for the Scots, but in the 24th minute, after No.8 Siobhan Cattigan and hooker Lana Skeldon had gone close, Nelson crashed over for a try which she converted herself.

And in the 31st minute Scotland scored a cracking team try, keeping the ball alive for a number of phases.

They showed great patience, and after winger Lauren Harris had gone close on the right, they recycled the ball left and centre Hannah Smith scored.

Spain scored their second try in the 38th minute, winger Maria Garcia going over. The conversion was missed and it was 12-10 to the visitors at the interval.

Scotland got off to a great start in the second half, scoring their third try in the 47th minute through Smith.

When Spain turned the ball over on their own line the danger looked to be over, but after full-back Chloe Rollie caught the exit kick she fed skipper Lisa Thomson who in turn put Smith in for the unconverted effort.

In the 56th minute Spain bagged their third try through tighthead prop Laura Delgado. Stand-off Patricia Garcia converted and it was 17-17.

They scored their fourth 10 minutes later, Patricia Garcia taking a quick tap to go over and convert again for 24-17.

And when the same played completed her try double in the 68th minute it was all Spain and 29-17.

Scotland were a bit shell-shocked and although they managed to get a late try by full-back Chloe Rollie, converted well by Skeldon, Spain held on for the win.