Sensation in the Rovato mud

The score is 12-10 to France, and we are three minutes into added time. Desperate French defence is holding the Italians at bay, but then the whistle goes. Offside. It will be the last play of the game, the packed stands are going wild with cries of "Italia!", the ball is 35m from the posts, and the pitch is a sea of mud... 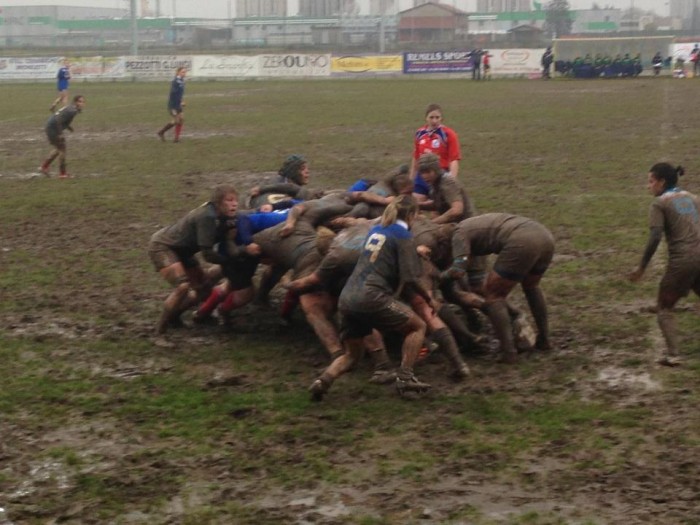 The Italian captain immediately pointed to the posts and passed to to veteren fly-half Veronica Schiavon.

Without batting an eyelid, as if it were just a practice kick, she placed the ball and kicked after a short run. The ball carried clear through the centre of the posts, and the referee blew for time. 13-12 - a first Italian win over France in the Six Nations. Over 2,000 spectators gathered at the "Giulio e Silvio Pagani" in Rovato celebrated a great and important victory.

"I feel like I have said before that we have grown up" said head coach  Andrea Di Giandomenico, "but we have. We are becoming a mature team that knows how to handle difficult moments. That has always been missing until now. Today the girls played a great game. Accurate when it had to be combative when under pressure. France was strong with scrum and within rucks and mauls have pushed us back. But we did not give up. We respond to attacks, but most importantly, we defended great. It's true that in the second half we played mainly in our half but the conditions weakened the French and they did not take full advantage of our mistakes. The girls have worked hard and I am happy.The victory is just reward for our organization and our defense."

In fact Italy took the lead first. On 11 minutes, in fact, a French defense penalty for not rolling away gave Schiavon a chance, which she too for 3-0. But soon French power in the scrum told. A long drive, followed  by a pick up by N'Diaye resulted in a try which was converted by Jessy Tremouliere (3-7).

But just before thre break Severin made a great run to score, which with Schiavon's conversion gave Italy a 10-7 lead at the turn.

Within five minutes of the restart France were ahead again when Mignot scored - but Tremouliere could not convert. At 10-12 the game was tense, the crowd on  its feet. Unable to penetrate the French defence, the Italians began a series of plays looking for an opportunity for the drop goal, but  the pressure instead resulted in a French infringements - and the final drama.

"They are still all excited", said Team Manager Maria Cristina Tonna, "It 'was a great match and an equally wonderful victory. Beating the French is not a trivial matter, because they want to win the tournament. I'm delighted about the local organization - and for the women's rugby it has been a special day. "