For different reasons both Kenya and Fiji's participation in last weekend’s IRB Women’s Sevens World Series qualifiers in Hong Kong have been described as turning points by their respective unions. 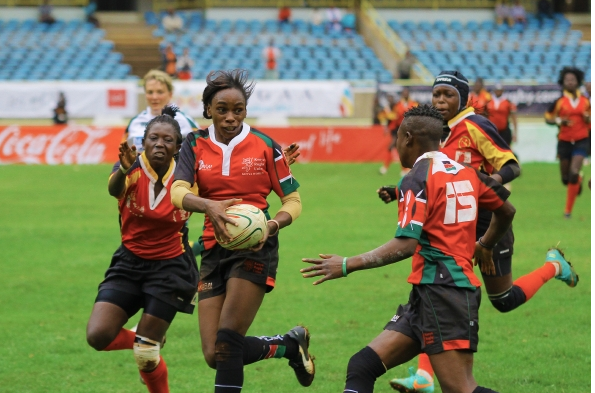 Kenya (pictured) finished 11th at the event, just ahead of Mexico, while Fiji were crowned champions and with that have won a place on the World Series this year.

But having returned home, both sides are speaking of the benefits of the tournament.

Speaking to Game Yetu, Kenya’s leading sports paper, Kenya Rugby Union’s Chairman Mwangi Muthee said the lessons learnt after the Kenyan team won one match against Mexico (55-0) and lost a close one to Hong Kong (14-17) will help the country to work on future progress.

“This is praiseworthy. You cannot take it for granted. Our men’s team plays at the top of the world at the moment, but when they began, in a handful of invitational matches in the World Series they first took part in many years ago, what kind of scores were we used to seeing? 70-0, 80-0; Cricket scores!

“The girls are just starting out and they battled bravely.”

He said the performance of the team in Hong Kong over the weekend, and during the recent African Championship when they finished second to South Africa in Machakos and a previous visit to the Hong Kong Sevens, had earned the team plenty of admiration.

“It is a wake-up call and hopefully stakeholders, including potential sponsors, schools, colleges, universities, the Ministry of Sport and the Government in general will give more attention -- technical, material and financial -- to the women’s game.

“We also call upon the International Rugby Board (IRB) to intensify support of youth and community rugby in our country through the effective ‘Get Into Rugby’ programme. This will help us retain the big enthusiasm in the game, especially by girls."

“That was an obvious key difference between our set-up and those of other teams we met at the qualifiers. A team like China, for example, does not have a rugby tradition you can talk of, yet they were so efficient; that’s because they have coaching personnel of the highest level. We must complement our fairly well-founded rugby culture with top level coaching for our top women’s team.”

Muthee said Kenya rugby future was good because there was now a system to maintain youth national teams in international competitions.

“Our 18-years-and-under team finished fourth in the recent Youth Olympic Games in Nanjing, China and just missed out in the Under-19 Junior Rugby World Cup in the African qualifiers."

“Women’s rugby has just as much promise as the men’s to go places and we shall ensure support including at youth level,” he added.

In Fiji there were similarly glowing comments from their Rugby Union chairman with Filimone Waqabaca saying that the qualification had brought much joy to those involved.

He said there was much to learn from the players and officials adding that their "selfless desire to represent the country was refreshing and uplifting".

Fijiana coach Tanivula hailed the players for the milestone achievement.

He hopes the qualification as a core nation in the women's 7s series will raise the profile of women's rugby in the country.

"It's huge, not only for Fijiana but for the whole country. It's a historical moment for women's rugby in Fiji and I know these girls have really worked hard for it," Tanivula told Times Sport from Hong Kong.

Tanivula said they had to step up their preparation in order to compete effectively in the series.

Vodafone Fiji 7s coach Ben Ryan congratulated the team and said he was looking forward to working together with Tanivula to ensure success for both national teams.

"It's great that Fijiana won the qualifying tournament and can now be exposed regularly to the best women's sides in the world which will hugely help their quest for Olympic qualification," Ryan said.

"A good positive culture between the men's and women's programme already exists and it's sure to get stronger over the next 12 months."

Ryan said it was exciting times for Fiji rugby.

"I think Fijiana did brilliantly to qualify for the series. Their preparation for this tournament was tough financially for them and hopefully this will improve.

"It's also important to see that the programme is a very new one and our goal should be just as focused on 2020 Tokyo Olympics as on Rio 2016.

"It's vital in the women's game we do talent ID and talent development now for the next generation post Rio."