Sevens joy for France and China

In a weekend packed with international Sevens action, the France women’s rugby side took the Invitational Women's crown at the Dubai Sevens while China were victorious at the East Asian Games. 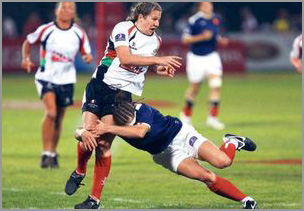 In Dubai, the French women's sevens team defeated the Wooden Spoons side, led by former England captain Sue Day, on a score of 19-0 in the final. Cheered on by a supportive crowd France took the game by the scruff of the neck and led 12-0 at halftime.

Runners-up here last time, the Wooden Spooners tried to come back in patches in the second half but were kept at bay by a resolute French defensive line.

In the semi-finals France were convincing in a 26-5 won over Tuks Ladies, whilst Wooden Spoon gritted it out against Moscow, coming through 10-7.

Rugby Ecosse Feminin took home the plate courtesy of a 15-5 win over the USA.

For Full Women's Results of the Dubai Sevens click here.