As the IRB Women’s Sevens World Series nears its start, teams have been getting ready around the world. The last few days has seen warm-up tournaments in Uruguay, France and Fiji, as well as important news from Africa. 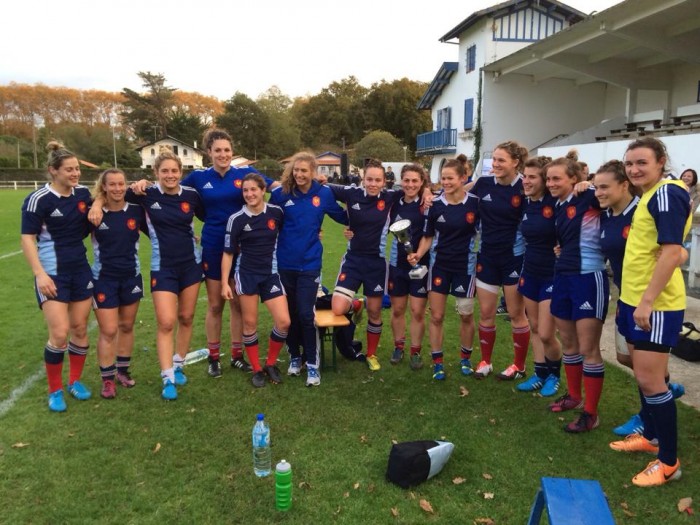 On Saturday eight teams from six countries travelled to France to take part in the second Souston Sevens. Played in a small town about twenty miles north of Biarritz this semi-official tournament gives unions a chance to try out their teams away from any publicity (most unions do not even announce that their teams are attending).

England and Spain entered two teams, while Ireland, Wales, Tunisia and France entered one each.

“England Chariot” dominated Pool A to reach the final, winning all three games against Spain, Ireland and Wales by a comfortable margin. The new Irish squad also had a good day, finishing pool runners up after a good 17-7 win over the stronger of the two Spanish selections, and fourth overall

France and “England TW3” were clearly the strongest teams in Pool B, winning their games against Spain “B” and Tunisia without conceding a point. However, it was the home team that had the edge in the final pool game to reach the final 14-0.

This was a close affair, but France’s new semi-professional squad finished off the tournament with a win by 19-17.

A major warm-up tournament on the men’s circuit now includes a top-level women’s event that included “Aussie Pearls” (effectively the Australia squad in all but name), Fiji, Papua New Guinea, New Caledonia and a number of strong invitational teams.

Tournament seeding promised an Australia v Fiji final, but the Fijians went down in the semi-final to an international (in fact a near USA Eagles) “Serevi Select” team who the Australians beat 19-7 in the final. Papua New Guinea took the plate, while New Caledonia won the bowl.

The first major sevens of the South American season saw victory for Brazil though – after thumping wins over Peru and Venezuela – it was encouraging to see them not have it all their own way in the final. Although Brazil won 25-10, Argentina’s two tries against them is one of the best performances by another South American team against Brazil for some years. Argentina will almost certainly be at the Olympics alongside Brazil in 2016.  Venezuela took third with a 17-10 win over Columbia, and Chile were fifth.

After a disappointing 11th place in the World Sevens qualifier in Hong Kong, the Kenyan RFU have disbanded Africa’s second strongest sevens squad. Director of women’s rugby Paula Lanco said “We want to start from scratch and have the Kenya Cup teams form women’s sides. This way, our player base will grow and we will have a larger pool of players to select from.”

Most of the old Kenyan squad had come from one club – Mwamba – and the hope is that by going back to basics the new squad will pull in players from a broader selection of teams. “We have a lot of talent in the country like Janet Okello who plays for Kenya 15s team. We need to nurture talent in the country and get these girls playing for some of the Kenya Cup teams,” Lanco added.

Kenya do not have a major tournament until the Hong Kong Sevens in March, giving them four months to build a new team. Kenya Rugby Union acting CEO Michael ‘Tank’ Otieno added that the first target will be to close the gap with South Africa. “You saw how the girls performed against South Africa at the CAR Sevens in Machakos in April. We pushed them close in the final and this is why we must strive to narrow the gap between us and them in the next couple of years.”