Sevens wins for France and Brazil 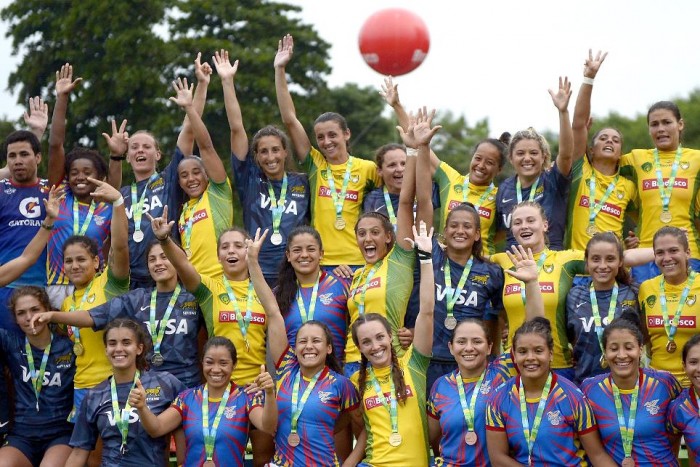 This year’s South American championship also doubled as a test event for the facilities that will be used for rugby at this year’s Rio Olympics (apart from the spectator facilities which have yet to be built). Brazil have won every South American title (except last year when it acted as an Olympic qualifier and so they did not take part) – in some years without conceding a point, so it was no surprise that the women in yellow and green claimed their 12th title last weekend.

After topping Pool A on day one (scoring 121 points and conceding none), the home team defeated Chile 41-0 in the quarter-final and Colombia 31-0 in the semi-final before teeing-up a mouth-watering final against a much-improved Argentina side.

Argentina had claimed their final place courtesy of a 38-0 quarter-final win over Peru and a 22-5 semi-final victory over Venezuela.

In the 32C heat of mid-summer in Rio, the final was a tense affair, but spurred on by a vocal home support Brazil pulled clear to win 27-5, with the help of a hat-trick by Edna Santini adding to her braces in the semi and quarter-finals.

Victorious Brazil captain Paula Ishibashi said: “This is a proud moment for Brazil rugby. Winning a 12th South American title is a fantastic achievement, but doing it on home soil in the Olympic Games test event is very special. “We can now look forward to continuing our preparations for the Olympic Games on the HSBC World Rugby Women’s Sevens Series. We are all excited about the Games and I am sure that rugby sevens will be popular with people in Rio.”

In the coming months the venue will play host to the modern pentathlon test event before construction starts on the 15,000 capacity temporary stadium .

World Rugby declared the test event a valuable exercise in familiarisation with Olympic Games structures and event delivery. World Rugby Head of Competitions and Performance Mark Egan said: “This event has delivered invaluable testing opportunity for the Rio 2016 organising committee and World Rugby. We can now collectively fine-tune ahead of the Games, where we anticipate fantastic men’s and women’s rugby sevens events.”

Although not part of the World Series, Las Vegas was an important testing ground for several national squads with Olympic ambitions – most especially Great Britain who were able to give tournament experience to Welsh and Scottish players who are unable to play for England in the World Series.

In practice most of the squads selected – and especially the teams from Olympic-qualified nations – were heavily experimental. Canada’s team were the Maple Leafs – their development squad – and Brazil’s top names were in Rio (above). In most cases this was about players looking to impress their own team managers ahead or Rio, or even looking further ahead.

Predictably the top national squads had the best of the pool games on the opening two days, though Brazil, Japan and Mexico missed out on the quarter finals. At the end of Day Two Great Britain had a tough quarter final win over Scoin Select, and Maple Leafs only beat South Africa thanks to a conversion, but USA and France comfortably qualified for Sunday’s semi-finals in the main stadium.

In the main stadium on Sunday the semi-final between GB and South Africa was highly competitive, with GB coming from 12-0 down with just four minutes to go to win 17-12 from the final play. France, on the other hand, had few problems beating the home selection – but did concede their first try of the tournament.

In the final GB were first on the board with an impressive try from Kay Wilson, running the length of the pitch down the wing, which was then converted by Emily Scott.

However, France came back to respond and bring the scores level in the second half before touching down in the dying seconds to secure the win.

“'I am really pleased with the performance of the squad this week," said GB Head Coach Simon Middleton.  "It's been a high-quality invitational tournament. The squad have put in some strong performances and grown throughout the competition. It's always disappointing to lose but our goal was to make the finals on Sunday in the stadium and that's what we did.

“The character of the group was highlighted in the semi-final coming back from 0-12 down at half time to win with the last play. We pulled up just a bit short in the final against a very strong French outfit but there's no shame in that. We are all looking forward to regrouping and going again in Vancouver next week when I’m hoping to see the group continue to grow as a unit."

Several of the squads will now fly to Vancouver where many of the same sides reconvene to contest the Vancouver Invitational tournament on Thursday and Friday.  GB Select have drawn USA Falcons, France Sevens, and Maple Leads Red in the opening pools. Middleton has made one change to the squad in Vancouver, replacing Heather Fisher for Amy Wilson Hardy.

Video highlights from the final