The fourth Women’s Sevens World Cup take place in Cape Town this weekend. In the second of our previews we look at the teams ranked from 10 down to 1.  Catch up with Part One here. 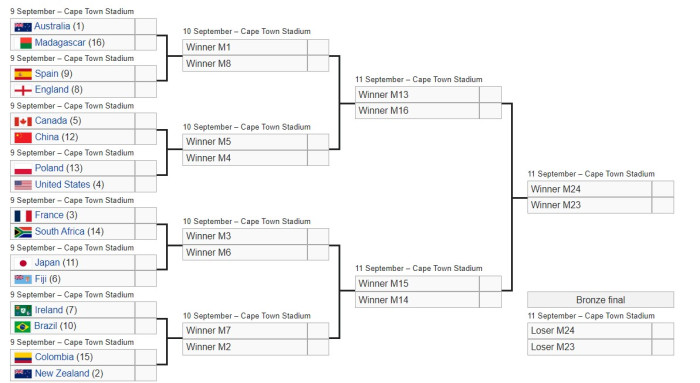 This will be Brazil’s fourth World Cup. Although perennial South American Champions, Brazil were only saved from relegation from the World Series after World Rugby were forced to acknowledge that Russia will not be returning in the foreseeable future, but their 21/22 campaign had not been without success, culminating in a 7th place in the final round Toulouse. Always competitive, they beat England and Poland twice during the series, and also recorded wins against Great Britain, Mexico, Belgium, Spain, Japan, and the United States.

Although they have not previously managed to reach a World Cup quarter-final, their recent form shows that they can pull out impressive results. They will certainly not be favourites against fellow World Series team Ireland, but they have beaten them in six of their 18 meetings, albeit not since 2017.

Spain have a great World Cup record, reaching the quarter-finals in every previous competition, including ending fourth in 2013. However, after missing out on the fifteens World Cup, Spain are going through something of a transitional phase with several key players and administrative staff leaving in recent months. Even their qualification for this event was seen as fortunate in some quarters after they lost to Poland in the final qualifier and just managed to beat Belgium 14-12 to win the final spot.

Nonetheless, their recent form again England is very good, having won the last six meetings between the two teams, including in the final round of the most recent World Series in Toulouse. In fact, they have not lost to England for nearly five years.

If ever there was an incentive, the fact that this will be England's last appearance on a world stage for an unknown length of time should make the squad want to go out with a bang. After this, England will be replaced in international sevens by Great Britain - at least in the World Series (it is unclear whether they will continue to play as England in European events). It was a move that did not lack in detractors, but with the Paris Olympics less than two years away (and two agonising fourth places at previous Games) it was understandable.

Although England’s recent World Series form has been disappointing, they have shown an ability to pull out impressive results when it matters – no more so than when they won Europe’s Olympic qualifier in before the Tokyo games. They also sailed through the qualification process for this tournament, conceding just three tries in four games.

England will also be wanting to make amends for the first round departure four years ago, and – despite recent results against Spain – will begin as strong favourites.

A team on the up, Ireland travel with high hopes, after two podium finishes on the World Series in 2022 - silver in Seville and bronze in Langford.

Once inconsistent, Ireland are now seasoned vets on this stage with players like Amee-Leigh Murphy Crowe and Lucy Mulhall among the most recognisable on the circuit. Youngster Beibhinn Parsons who has a tough year with injury is also back in the fold.

They will expect to beat Brazil but are then likely to face New Zealand in the next round, a team they've never beaten. Ireland though provided the shock of the opening day of the last edition of this event, knocking England out in game one. They are capable at their best of beating anyone so they're one of the teams to watch.

Fiji are a team that could go all the way… or slip up early on. But whatever they do they will be exciting to watch.

Fiji were amazing at the start of the most recent World Series, but faded somewhat in the latter half, only to explode back to reach the recent Commonwealth Games final. The also beat New Zealand 5-1 in a home series that saw the Ferns return to international sevens.

In short, Fiji have the ability to beat anyone in this tournament – but a record that suggests that they can also lose to anyone, including Japan who they have lost to three times in 10 meetings, most recently at Glendale in 2019.

Another team in something of a transition following the much publicised departure of a long-standing coach, and the retirement of several experienced players. The recent World Series was therefore perhaps disappointing if not surprising, with the Canadians reaching quarter-finals but never going any further.

The Commonwealth Games saw a return to form. Canada missed out on a medal, but their bronze medal playoff with New Zealand was a memorable game.

China, who they have not lost to for over a decade, should not be a major barrier to progression.

USA coach Emily Bydwell described the team as disappointment and dissastisified with their performances on the last two rounds of the World Series, and with the team not playing competitively since they are reliant on intense training camps and some runouts in South Africa against teams like Ireland and Brazil to have sharpened up.

Semi-finalists at their home event four years ago, the USA harbour hopes of a medal. Knowing they comfortably beat Poland when they last met will give them comfort going into the opener that they can progress to the knockouts.

Few remember now how late to the party France were, after World Series began. They did not join until 2014/15 - the third season – alongside Fiji. But they quickly than made up for that late start, and are now by some distance Europe’s leading team. And all of this has been achieved under the same coach – David Courtiex – who has been in charge of France’s sevens team since 2010.

France did not win this year's European Championship, but little should be read from that as they fielded a young development team having a greater focus on this event and the World Series that follows it. After finishing runners-up in the last World Cup, Olympics and World Series their target will be finally turn silver into gold.

Although they are up against the host team in match moved to “peak time” away from rest of the draw, it is unlikely they will face serious problems and should be in the running for a podium place.

What is there to be said about the team that has won everything in women’s seven, in most cases multiple times? Reigning Olympic champions, they were unable to retain their World Series crown after COVID ensured that they could only take part in the final two rounds. Yet they still finished fifth, after ending runners-up in Langford and winning in Toulouse.

The Commonwealth Games was a disappointment where they could only take bronze after losing a titanic semi-final to arch-rivals Australia, and they will be determined to bounce back – as they invariably do.

The idea of the Ferns going home from a major sevens tournament without a medal of some sort seems inconceivable. And with a first meeting with Colombia unlikely to offer any problems, followed a quarter-final against Ireland or Brazil – neither or which they have ever lost to – their route to the semi-finals looks as clear as they could have hoped.

It's just over a month since Australia's heroics at the Commonwealth Games and in a year in which they also reclaimed the World Series title, Australia are full value for their number one seeding.

The disappointment of losing early at the Olympics last year has driven the team on this year with standout performances from their key players like Charlotte Caslick, meaning they have been almost untouchable in recent months.

The squad have referred to this event as an opportunity to win a 'Triple Crown' where they would become the first team to win the World Series, Commonwealth Games and World Cup in the same year - something New Zealand were not able to do in 2018 as they didn't manage to take out the World Series that year.

There is a historic opportunity within their grasp.