Sevens World Series is back!

At last, after many false starts, the Women’s Sevens World Series returns this weekend. 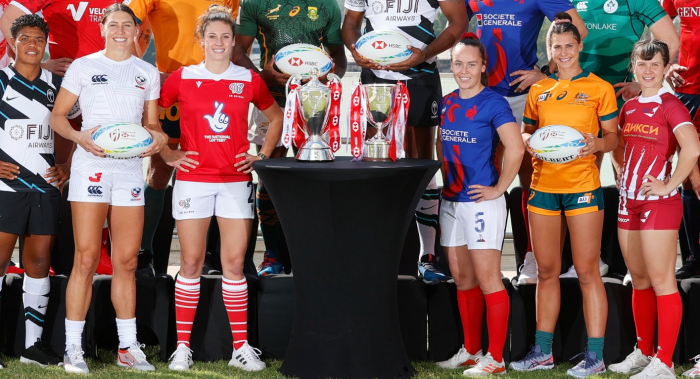 663 days after the Sydney Sevens came to an end on 2nd February 2020 the Seven World Series finally gets going again of Friday when the first of two back-to-back rounds begins in Dubai.

Only 10 teams have entered the first of six tournaments currently planned for the series. Due to COVID-related travel problems New Zealand are absent, and due to pre-Olympic contractual arrangements Great Britain are playing in place of England.

The reason for latter is that a 2021 World Series would have featured Great Britain in place of England, so that Great Britain could prepare for the Olympics. All pre-Olympic tournaments were later cancelled, but the agreement to allow Great Britain to play throughout 2021 remains in place.

With New Zealand and England absent (and the potential for other absences in future tournaments), World Rugby have said that the Series will now be decided based on points from each nation’s best four tournaments from the six in the calendar. It is unclear what would happen if England or New Zealand were forced to miss any of the remaining four tournaments, or what would happen should one of the four be cancelled – but everyone is hoping that neither eventuality will occur.

World Rugby have also confirmed that the bottom Core Team will be relegated this year.

The lack of almost any competitive sevens outside the Olympics for two years makes this tournament massively unpredictable – and also possibly the toughest round of the World Series there has ever been.

One reason for this is that Great Britain effectively fill the place of a “guest team” in this round (and also the next, also in Dubai next weekend) in that they will not play in any rounds next year. As unbeaten Fast Four champions from the two tournaments in Canada in September this makes them probably the strongest ever “guests”.

Great Britain are drawn in Pool B with Russia, Fiji, Ireland and Canada. The game against Fiji alone is one to savour as it will bring back memories of the Fiji’s bronze medal play-off win against Great Britain in Tokyo. After that bronze we can expect Fiji to challenge more than ever before for the top places in the tournament and the series.

Russia and Canada were also in Tokyo but had disappointing Games. Both will be looking to bounce back and be ready for both next year’s World Cup and the Paris Olympics, which are now less than three years away.

After their performance in Tokyo, Russia’s biggest change is the coach, Alexander Alekseenko now stepping into the role. Most of the Russian squad is very familiar, with Nadezdha Sosonova taking over the captaincy – a very rare instance of a mother captaining an international women’s team.

Canada also have a coach new to the Women’s Sevens Series – Jack Hanratty – who, as interim coach, will be looking for good performances. At present the Canadian squad has not been named but with recent retirements – not least Ghislaine Landry – is likely to have a very new look to it

Ireland missed out on Tokyo and are a classic mix of youth and experience that will also be targeting World Cup and Olympic places, and looking for a good start here.

Pool A will kick off the tournament with Australia taking on the USA. Eight of the Australian 13-woman squad for the first two rounds are under 22, including four debutants and four players with only five or less appearances in the green and gold which means a lot of responsibility resting on Sharni Williams and Charlotte Caslick.

The USA also have a new coach in Emilie Bydwell – currently the only woman coach in the series. She also takes a young squad with six players who tasted international rugby at the Fast Fours, where the USA ended runners-up to Great Britain. However the other half Abby Gustaitis will captain has plenty of experience with Cheta Ember, Alev Keltar and Kris Thomas leading the way.

France and Spain will meet in the second Pool A game. Olympic silver medallists France start the tournament as favourites with a squad that means business – full of experience with Grassineau, Izar, Neisen, Okemba, Ciofani, Pelle and Ulutule all available to David Courteix.

Spain, on the other hand, missed Tokyo and are in more of a rebuilding phase. Their squad – as with Ireland and Australia – includes familiar names such as Ecehbarria, Erbina, Fresneda but also some new faces.

Finally Brazil complete Pool B, and will start the season as favourites for relegation – however good they get, and however much they dominate South American rugby, the rest of the core teams get better. And to emphasise how tough it’s going to be, they open against France.