After a November largely concentrated on fifteens, sevens moves back centre-stage with the second round of the World Series in Dubai this weekend 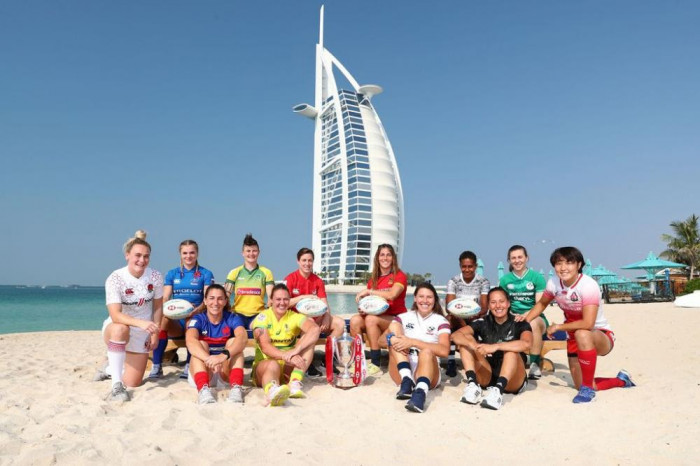 The big question is whether the United States can make it a hat-trick of consecutive tournament wins after ending the 2018/19 season with a win in France, then starting this season with another win at home in Glendale

USA are, needless to say, ranked at number 1 in Pool A which features great rivals Canada, Russia and Brazil.

In an interesting mirror image of their fifteens rivalry, Canada lead 22-7 in their 30-match history against the USA, but have no beaten them since the final of the Pan American Games in July, and not in the World Series since back in April. This is in complete contrast to results at test level which have gone in precisely the opposite direction, an indication perhaps of differing priorities between the two North American teams.

Canada welcome back two experienced players in Brittany Benn and Sara Kaljuvee. Canada captain Ghislaine Landry said: “We had a couple of tight finishes in Glendale that didn't go our way. The results were obviously pretty disappointing for us, but looking at the video we know what went wrong and we're ready to fix those things.”

One of the big stories for Dubai is also in Pool A with the return to international rugby of Nadezhda Sozonova (nee Kudinova), along with Marina Myasnikova (nee Petrova). Sozonova returned the Russian squad during the summer after a three year gap, but missed Glendale. It will be fascinating to see if the former national captain she can recapture the form that saw her named in out “sevens squad of the decade” a few weeks ago.

Series champions New Zealand are the defending champions in Dubai – a title which, remarkably, no team has ever previously successfully defended.

The Ferns welcome back Tyla Nathan-Wong, Alena Saili and Shiray Kaka, with Nathan-Wong taking on the captaincy after Sarah Hirini being ruled out of the Dubai and Cape Town due to injury.

“The goal for everyone is the Olympics next year, but you've got to take it tournament by tournament and appreciate and enjoy those milestones along the way,” said Nathan-Wong. “For us that's what we're looking forward to is just the journey first and experiencing each tournament and eventually we'll get to Tokyo.”

New Zealand are in an interesting Pool C along with France, England and invitational side Japan.

France welcome back Fanny Horta and Shannon Izar , as well as Marjorie Mayans who switches codes again after turning out in the first XVs test against England last month. “La Blonde Destroyeus” spoke about her teams ambitions for the upcoming year: “I hope 2020 will be ours. We have the opportunity to make a big impact, but we need to be more consistent and start to beat the top three more frequent often though for now the biggest target will be the final Olynpic qualifying tournament, scheduled for June".

England, without qualification worries, continue to look to develop new talent and field one of the most inexperienced squads in Dubai – only Ireland, Brazil and Japan have fewer tournament appearances. Abbie Brown leads a squad where Amy Wilson Hardy and Heather Fisher are the most experienced faces.

Australia, runners-up in Glendale, are drawn with Spain, Fiji and Ireland in Pool B.

Australia have a good record in Dubai and include two debutants - Georgia Hannaway and Faith Nathan, following Charlotte Caslick being ruled out with a hamstring injury.

“We've got some fresh young faces to really hype up our team and to give them an opportunity to showcase what they are about and what they can offer for the Olympics to come, so I think that kind of keeps everything fresh,” admitted captain Sharni Williams. “It's obviously not the consistency side with the team but consistency in what we want to do in terms of making the finals.

“Glendale was really great for us, to make a final. It took us so long last season to make a final. We were very happy with how we went. It’s about consistency and that’s what we’re here to do.”

Spain – who had a good start to their season in Glendale – include one new name, Lucia Diaz, in an otherwise experienced team

Fiji qualified for the Olympics a month ago by winning the Oceania title, and include captain Rusila Nagasau and Lavenia Tinai who last week played for the fifteen team that won a place at RWC 2021 in New Zealand.

“For us to go to 15s and come back to sevens, they (their team-mates) were really happy for us to qualify the team,” said Tinai. “Getting their support that is the main thing for us, just to keep women’s rugby moving forward in Fiji. We came back from a high note, and ready to go.”

Dubai will, however, be a return to reality as that 11th place could see Fiji involved in a relegation dog-fight with Brazil for rest of the season. They will be desperate to pull themselves out of the drop zone.

The action gets underway at 7he Sevens Stadium at 14:50 local time (GMT+4) on Thursday 5 December with the women playing one pool match