Should women play with a smaller ball?

Rugby World magazine recently ran a piece on the long running debate on the ball size used in the women’s game. The opinions given by England head coach Simon Middleton and Wasps ladies Director of Rugby Giselle Mather are reprinted below. Let us know on Twitter @scrumqueens what you think 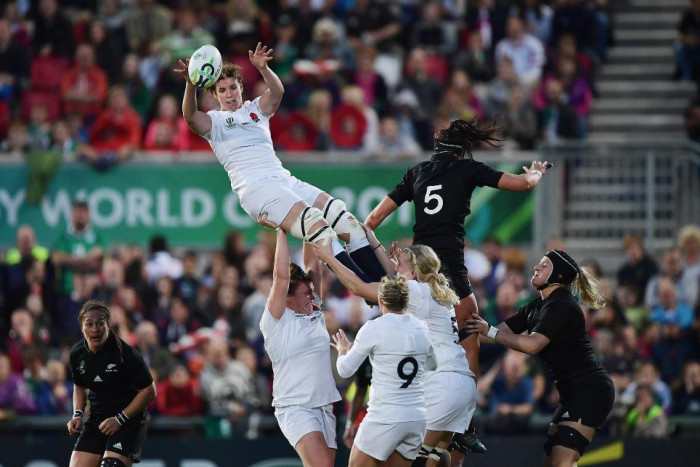 I think playing with smaller balls would help improve the game and create a better spectacle. There was great attacking play in the World Cup and there’s a real commitment to play that brand of rugby in the women’s game. A smaller ball would reinforce that.

We experimented with it in sevens before the Olympics, trialling a ball between sizes four and five. It was received positively by players and coaches.

In terms of being able to handle the ball and carry it one-handed, I think it would help. You’d see more offloading in the game and we’re always trying to promote an attacking brand of rugby.

It would have an even bigger impact in sevens, which tends to feature more of an offloading game because there is more space. Players would also be able to carry the ball in one hand more, which would promote playing the ball out of contact.

It’s definitely got its advantages. It would be good to explore this and see where it goes.

I don’t see why we should have a smaller ball when we play to the same laws and on the same-sized pitch as the men. Football don’t change the ball, cricket wickets are 22 yards long, hockey has the same stick – whether men or women. There are no differences in the laws we play to and if you change that, they could change other laws for us. It messes with the purity of the game.

There are things of more importance to invest our energy and time into, like the Tyrrells Premier 15s competition or why the ball-in-play time during the World Cup was 10% higher than in the men’s game. Why not look at that instead of what size ball we’re using?

This is a thorny issue which divides opinion in the game but we believe World Rugby should pilot it again and compare the results to establish if a smaller ball would improve key fundamentals in the women's game, such as longer range kicking and passing.

To put this long running debate to bed - the game needs thorough and significant evidence that only a detailed trial could offer.

There is plenty of precedent in other sports for subtle equipment and rule changes, designed to better adapt sport to women's physiology with the aim ultimately of improving the sport as a spectacle.

In athletics, the women's hurdles are 2ft 9in while the men hurdle over 3ft 6in for example and there are more weight divisions in Olympic men's boxing, wrestling and weightlifting than in the women's side of the sport.

In Ireland, women's Gaelic football has a subtle change which many argue makes the women's game more free flowing - women lift the ball straight off the floor instead of flicking it with their foot as well as the fact they use a smaller ball.

However, precedent also urges caution about racing to assumptions that the game would simply improve with a smaller ball.

It might mean a ball that is easier to handle for example, but this does not necessarily mean that, being lighter, the ball could be kicked or thrown further. The physics can get very complex but a lighter ball (a Size 5 ball is about 400gms, a size 4.5 might be 380gms) would have less inertia, thus making it harder to throw or kick the ball a long distance.

Take women's cricket as an example to illustrate this. It has always used a 5oz ball, instead of 5.5oz in the men's game, because it allows the ball to be gripped better by bowlers.

But, despite being 10% lighter, this does not make the ball easier to hit for sixes. If anything (though there are many many other variables) the reverse may be true. Cricket also suggests that even a maginally smaller ball behaves differently - it may spin more easily, for example.

This suggests that the only way forward with this debate - which has been going on for a decade or more - would be a major pilot organised by World Rugby with transparent evidence and results.

There is another point to consider too. Many of those who strongly oppose a move like this have, justifiably, argued that comparing skills like passing or kicking with the men's game at the highest level is to compare apples with pears. Where professionalism bumps up against amateurism comparisons are often defunct.

Utill recently that argument has had much validity, however women's rugby is entering a new era - and in an era of professional these comparisons do become much more genuinely valid.

It is true that the World Cup was played to a high quality and as Giselle points out, the ball in play time was longer, however below test level, standards of passing and kicking are hugely varied. If this could help - why not find the evidence base and see?

‘Rugby World features women’s content every month and in the current issue looks at how South Africa are rebuilding their women’s programmes with a feature from Scrumqueens editor Ali Donnelly.
Tweet