England have made two back-line changes to their starting line-up for Saturday’s clash with the Black Ferns at Twickenham. 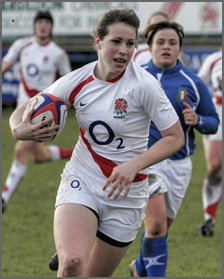 England coach Gary Street has dropped Fiona Pocock and Alice Richardson to the bench and their spots are taken by Emily Scarratt (pictured)and Rachel Burford.

Scarratt, who has mostly featured at outside centre for England, will slot in at fullback with Charlotte Barras moving to the wing, while Burford takes a centre spot alongside her Richmond teammate Claire Allen. Kat Merchant stays on the other wing.

England head into the match looking to avenge their 16-3 defeat to the Black Ferns last Saturday, and secure an all important win against the world champions just nine months before the Rugby World Cup kicks-off in London.

Street said: "We have made some changes to freshen up our midfield, and bring something new to the table for this final clash against New Zealand. We learned some important lessons last week, and we know we need to be more disciplined and more effective in everything we do this Saturday. If we do that then we know we have the potential to win this game.

Playing at Twickenham stadium is a massive opportunity for us to show how good this side is, and how skilful women's rugby is. Certainly being at home for this crucial match is going to give us that extra five percent on the pitch. We are relishing this opportunity.

Meanwhile Black Ferns coach Brian Evans has also named his side to take on England this weekend.

Following his sides impressive performance against England A mid-week, Evans has retained eight players who started that game, including centre Renee Wickliffe, who is more used to life on the wing but who caused Englands defence all sorts of problems on Tuesday night.

Evans said this was an opportunity of a lifetime for his players and something they would relish.

Playing three games in one week has been a big challenge but we are looking to finish this tour with a clean sweep. However, we are under no illusions as to how tough and physical England will be, he said.