With the Women’s World Cup just over two months away, two of the final capped test games take place in the coming days ahead of the big kick off. 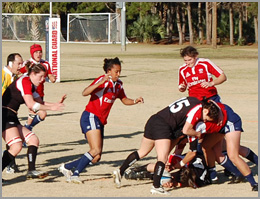 On Saturday, Scotland host South Africa in the second of two-tests while on Monday the USA host Canada in the first game of their series.

The two games are some of the final full test matches before the World Cup kicks off with the USA and Canada playing once more the week after.

England and Wales are planning to play each other in the coming weeks but in training sessions as opposed to full games, while Ireland and Scotland will do likewise.

The remaining teams have wrapped up their test-playing schedules with Sweden in action in recent weeks at FIRAs European Championships and Kazakhstan recently returned from Dubai where they lined out against South Africa in two games.

The Scotland and South Africa game this weekend is a big one for the host team who are looking to avoid a run of six games without a win.

After they beat France in their first game this year, hopes were high that the Scots were due for a good year and a solid 6 Nations but progress has stalled somewhat and Gary Parker's charges will be attempting to get their season back on track on Sunday before they play an Irish selection in a last warm-up on June 18.