Singapore line-up back to back games. 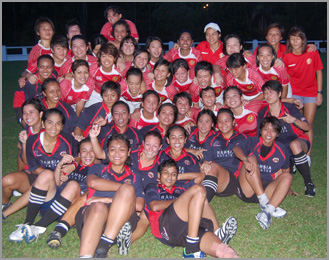 Less than a month after fielding at A level for the first time, Singapore will continue their build-up to the Asian Womens Rugby World Cup Qualifiers with a game against Malaysia this weekend. It will be the first time Malaysia have ever fielded an international womens team as they follow in the footsteps of Barbados and St Vincents who also fielded national sides for the first time this year.

But Singapore will be in no mood to be charitable to their new national competitors as this game is just another step in their buildup to the Asian World Cup Qualifiers in November which will see them compete against Hong Kong, Kazakhstan and Japan for the last spot at the 2010 event.

In September, Singapore A defeated the Malaysian Barbarians in a tight 10-7 game and with the full senior team this Saturday facing Malaysia, nobody can accuse the Singaporeans of being ill-prepared for the Qualifiers as they are also due to play Hong Kong on October 10 in another friendly.

Womens Rugby Development Manager for Singapore Rugby, Eunice Tay said: The game will be a good platform for us to prepare for the upcoming friendly game with Hong Kong on 10 Oct in Hong Kong. The two games will help the team be more confident in the World Cup Qualifiers.

Singapore will know what to expect from Malaysia as they will have seen many of their players line-out for the Barbarians last month as well as having seen them compete in the Singapore league earlier this year. A tough challenge should set them on the path to performing well at the World Cup Qualifiers which is the ultimate aim of the game.

The game is Singapore's tenth international match. A number of players including Esther Phua (injury), Serena Yeoh (injury), Gina Tan (unavailability) and Haseena Allapitchay (unavailability) cannot be considered for selection and their absence will likely see Koh Mei Giet start at hooker and Angelina Liu win her first cap somewhere in the back three.