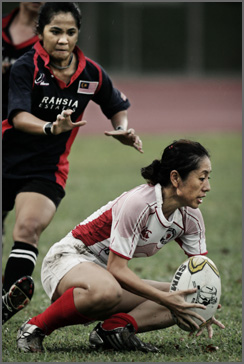 Singapore got their preparation for the IRB Women's Rugby World Cup Asian Qualifiers off to a perfect start with a 63-0 victory over Malaysia who were playing their first ever test match. In an entertaining and spirited game the greater match experience of the home side was a telling factor in their 11-try performance.

Malaysia captain Lim Chin Wei said that like womens rugby all over the world, getting recognition was not without its difficulties. "The biggest hurdle was initially changing the mindset of Malaysians in general about ladies rugby and its potential. I hope MRU will continue its support and take ladies rugby in Malaysia to bigger and better things - more tournaments, friendlies and test matches."

On their first outing, Lim felt the team learnt a lot about the game and themselves. "Everyone took back a piece of "experience". Overall, the test match was a first for us and we are embracing it and hope to do better next time round."

With the exposure for the team, the girls will be looking forward to a significant growth in the game with a bigger pool of players, increased participation in more tournaments and support from the Malaysia Rugby Union.

Meanwhile Singapore Head Coach, Sam Chan, declared the display as being satisfactory for the teams first outing but expects Saturday's away game in Hong Kong to be more of an indicator of where the team is in their preparations.

Singapore fullback, Leung Wai Mun, who scored a hat-trick in Saturdays game came away with a broken finger. She was underwent surgery on Sunday and her participation in the qualifiers will have to get and all clear from the doctors in the next few weeks.

The winner of Japan versus Singapore and Hong Kong versus Kazakhstan in November will play for the lone qualifying position for the 2010 Womens World Cup. The 11 teams already qualified are England, New Zealand, France, South Africa, Canada, USA, Ireland, Wales, Sweden, Scotland and Australia.