We look ahead to the final three games of the women's Six Nations. 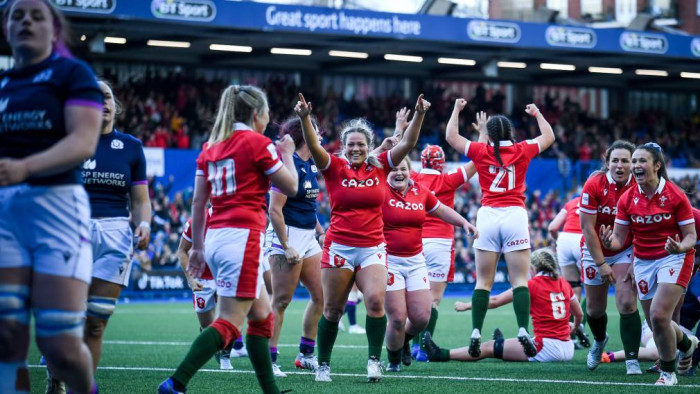 Wales go into this game knowing that a bonus point will give them third place in the Championship a finish that Wales have not achieved since 2009.

Wales will start as narrow favourites after promising performances in their defeats to England and France in their two most recent games, following on from the two strong wins over Ireland and Scotland at the start. Coach Ioan Cunningham said this week:  “We have certainly made good progress as a programme. We’ve achieved a lot of what we wanted to work on after the autumn campaign but we still have one big week to go against a good Italian side so we are putting everything into finishing as strong as possible.”

Among the changes to the team for the weekend Sioned Harries, Alex Callender, Kelsey Jones, Cara Hope and Donna Rose all come into the pack. All have impressed over the course of the Championship, with Harries in particular bringing power and passion into a team which has look reinvigorated.

Italy have been inconsistent throughout their campaign.

They started with a good performances against France and did well to turn the game around against Scotland last weekend, but were also disappointing against Ireland and England. Assistant coach Plinio Sciamanna revealed that a “change in attitude” among the team during the halftime break last weekend was the turning point:. “We told ourselves to keep the focus on possession when we played in their half of the field and to exploit our physicality. There was a lot of confidence, we felt that it was a game within our reach. The team had prepared well during the week, the self-belief on the pitch was key."

They have made three starting changes, including a return for scrum-half Sara Barattin, Italy's most capped player. Elisa Giordano returns at number eight, while Silvia Turan comes in at prop with Melissa Bettoni moving back to hooker.

After so many one-sided matches, this is the game everyone has been waiting for.

England are the team to beat having won their last 18 matches in the Six Nations and they will line out in Bayonne seeking a fourth consecutive title. They have already beaten their own record of points scored and have won the last nine meetings between the teams.

However, France in France tends to be tough, especially in this competition, and when you consider that they have won 21 of their last 22 home games in the Six Nations, then it is obvious that this will be no pushover, even for an outstanding England team. For the sake of being able to argue that this competition is genuinely competitive, everyone could do with this game being close.

We have not seen France at their best over the course of 80 minutes in any of their games, but they have still won comfortably and tend to get the job done early before easing off later on.  Laure Sansus is in masterful form at scrum-half, Caroline Drouin is back at flyhalf, and Maddassou Fall and Celine Ferer have been superb. France’s biggest concern will be how they have switched off later on in games and playing an England team with the opposite problem – they have tended to start slower before exploding into it – they will need to avoid a repeat.

England have hammered teams and yet are finding areas to work on. In patches both Ireland and Wales have showed how to frustrate them  - namely slowing their ability to recycle quickly at the breakdown, but they have such an array of weapons that over 80 minutes it is hard to bet against them.

Ireland have been boosted by the news that Sene Naoupu's red card has been rescinded and she is free to play again this weekend and in further good news, Sam Monaghan is also back after injury forced her to miss the game against England.

Both players come straight back into the starting team as Ireland seek to build on some of the positives from last week's heavy defeat.

A strong first half performance as not enough to mask the fact that the Irish are firmly in tier two of this Championship, and Scotland this weekend will be a much fairer and closer contest.

Ireland's set piece struggled last week but their pack were immense around the park with Neve Jones and Edel McMahon prominent and they will surely look to build on the success they had at the breakdown last week.

Scotland have been disappointing in this year's Championship, failing to back up their promising and successful campaign to qualify for the World Cup and playing in fits and starts. Their biggest problem has been an inability to convert the many chances they create but they have also had some bright spots with the form of players like Evie Gallagher, Christine Belisle and Rachel Malcolm up front positive, while through Chloe Rollie and Rhona Lloyd they have players capable of special things out wide.

This is likely to be close, and something in fact of a revenge match, with the Scots having dumped Ireland out of the running to qualify for the World Cup. Well worth watching.