We look at the talking points from Round 1 of the TikTok Women's Six Nations Championships. 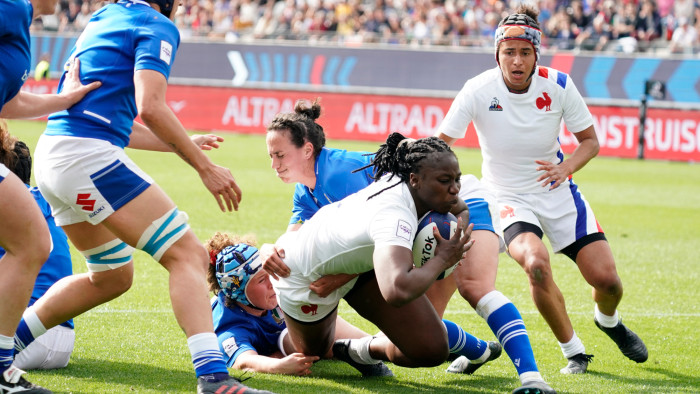 Big wins for the favourites – but room to improve

It seems odd to be critical of teams who both won comfortably but England and France’s performances have plenty of room to improve, something Simon Middleton acknowledged about his side in post-match interviews.

Yes they both won by wide margins, but both conceded unusually high numbers of often unforced errors and turnovers, making both matches at times, frustratingly stop-start.

There has been a long gap since teams played test rugby so perhaps this is understandable, but the challenge that teams like England and France have is that in most games they can make errors like this and get away with it.

The issue then is that the games that win tournaments are the ones where these will be punished.

We can expect that the coaching teams will be looking to cut down avoidable errors as the tournament builds to its climax and that hopefully by the time we come to the final game, the teams will be more well-oiled machines.

Get used to talking about records.

Every round of the Six Nations is likely to break new records, in part a recognition of the growing interest in the women’s game but also a reflection of it successfully shaking off its reliance on the men’s championship.

The new window gives it important solo attention but also crucially, for live crowds, will bring us rugby in good weather, helping to attract a much wider range of supporters in much bigger numbers.

Every game brought a record at the weekend - France had over 13,000 in Grenoble, their biggest home crowd against Italy, Ireland broke at home record against Wales with over 6,000 in Dublin and Scotland too attracted their best crowd at home. We have yet to hear about TV audiences but expect all manner of records to be broke before the championship is up. Truly a new era.

Lots to take for the losing sides

Sure, results are the business of sport, but arguably Scotland, Ireland and Italy will all be able to take some satisfaction from the weekend’s games. Ireland, with the most inexperienced team of the weekend, were excellent at times till their late implosion, with Eve Higgins, Lucy Mulhall,  Dorothy Wall, Sam Monaghan and Linda Djougang all impressing; Italy showed positive attacking intent throughout with Beatrice Rigoni and Alyssa D’Inca showcasing their talent in the backs while Scotland’s set piece has been commended and they did not make it easy for England.

For Scotland, their competition really starts this weekend in Wales and that is already shaping up to be the match of the weekend. Ireland will not find it easy in France while all signs are that England will be far too strong away from home in Italy. Still, there is plenty for all of them to build on.

What a lot a little investment can do

There was no clear consensus of how quickly investment into the national team would take effect in Wales before the championship.

When England turned professional in 2019, it took a little time to see the difference, but they were already extremely well resourced and the process for them was probably one of incremental change,

Wales on the other hand have gone from a standing start into a mix of fulltime and parttime contracted players and the difference seems swift.  In his post-match interview Irish coach Greg McWilliams hinted at a great point – which is that in the women’s game, it takes a lot less to narrow the gap than the men’s game.

A little investment can have a massive impact and Wales are a reminder that countries can can reap immediate rewards if they do so, because the bar for that investment is so low.

It is less a case of marginal gains, and more a case of minimum cash for maximum gains.

Let’s remember that many of the Welsh players have taken a pay cut to train fulltime and reportedly are barely making a living wage. Even with a new-look Ireland, to be beaten 45-0 one season, and then go away and beat the same time the year after with a bonus point is remarkable. T

here’s still a lot to do to get the women’s game in Wales firing on all cylinders, but what a start their best players have made to their new era.

A reminder that rugby is a squad game

There were some superb performances off the bench at the weekend, in a reminder that rugby really is a 23-player game.

In France, Laure Sansus and Emilie Boulard came on and shook things up, helping their rather lethargic side secure a bonus point and both will surely start against Ireland.