After two weekends of dominant scorelines, we might well get tighter matches this time around with Ireland hosting France and Scotland taking on Italy. 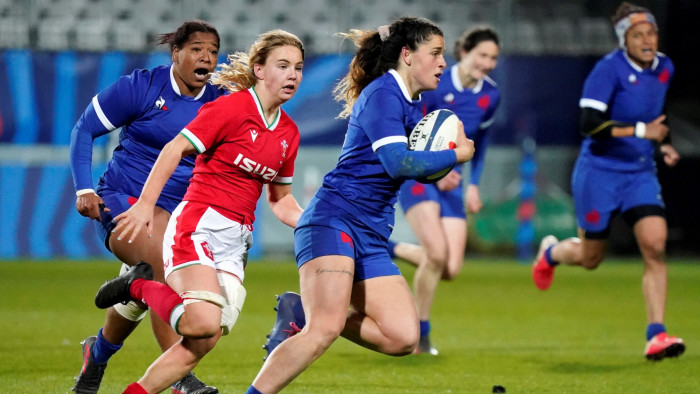 This weekend promises two exciting and unpredictable games. France and Italy may be favourites, but both are playing away from home against opponents confident that they can cause upsets

There are no changes in the Ireland starting line-up this weekend  - no surprise given Ireland's total dominance against Wales last weekend, but there is an exciting addition on the bench, where the brilliant 7s player Amee-Leigh Murphy Crowe could win her first 15s cap.

Murphy Crowe has scored 98 tries in 131 World Series matches and alongside Stacey Flood, provides Ireland with pace and attacking prowess off the bench - albeit both of them are very green in the test game.

With the winners of the game playing England, who will be at home, in the tournament final, this game could bring the excitement that has so far been missing from the campaign.

Ireland were excellent against Wales but will know that they'll face much tougher opposition this time around.

"We know France will be another step up in terms of intensity and physicality and have quality players across the park," says Griggs.

"We have spoken a lot in this group about testing ourselves against world class opposition, Ultimately, we have to stay focused on improving our own game with each performance so to play the fourth ranked team in the world will give us a great indication of where we are currently at."

France are taking no chances with their trip to Ireland this weekend for what amounts to a Six Nations semi-final. Fresh from their triumph in Dubai, several of their sevens squad has been drafted in to reinforce the fifteens squad for Dublin.

A week off between after the Welsh game has allowed Caroline Drouin, Jade Ulutule (formerly le Pesq), Carla Neisen and Romane Ménager to return from Dubai and undertake seven-days isolation joining their fifteens colleagues.

Caroline Drouin commented that “ this is not the first time that we have crossed the bridge between the sevens and the XVs. We are now well adapted to it and we are now used to being able to move from one discipline to another. We quickly find the level. It's great to be able to play both because each format brings us different things and makes us develop. "

The same goes for Romane Ménager, for whom this is her first cross-code challenge. “It doesn't pose any big problems for me”, she said, “because we know the different game plans well. We reintegrate very quickly and it's also up to us to make the effort to get back to the same level”.

Coach Annick Hayraud is also pleased to have the extra reinforcements. “It gives us additional options and an added value because they are experienced players and make things is very interesting for the XVs squad! "

There is no Jessy Tremouliere, who is presumably injured, though Emilie Boulard showed her talents on debut last weekend.

The much anticipated World Cup-rehersal has become all the more exciting and unpredictable following Scotland and Italy's performances against England.

Despite their good start against England where they looked like being a real threat, Italy were eventually lost by one of their largest ever magins, partly by being reduced by yellow cards. Scotland, on the other hand, frustrated England as much as they had France last Autumn, and - despite also being reduced to 14 players for the end of the game - ended with one of their best results against England for some years.

As a result - despite the difference in the in rankings - this game could go either way.

Evie Gallagher, who received her first cap during Scotland’s opening game against England, will make her first start this weekend at blindside flanker as Rachel Malcolm is ruled out for remainder the tournament after sustaining a knee injury against England and tighthead prop Megan Kennedy returns after missing the opening match due to injury; Sarah Law starts at fly-half; and Liz Musgrove moves to the wing from the bench.

The final change sees a positional swicth with Helen Nelson starting at inside centre in place of Hannah Smith who at the GB Sevens training camp. Nelson will also take on the captaincy duties in Malcolm's absence, with Lisa Thomson at vice.

Evie Wills and Coreen Grant could potentially make their Scotland debuts this weekend if called upon from the bench.

Easson said: “We will be looking to build on the positive aspects of our performance against England, particularly our set-piece and resilience on the pitch. I was really impressed with our ability to put England under pressure in that second-half, but we will now be looking for the players to bring that form for the full 80 minutes against Italy and turn the pressure into points.”

Andrea Di Giandomenico has announced his team for their game against Scotland with a place in the third-place playoff on the line.

Ostuni Minuzzi – who had to pull out of the game against England at the shortly before the game - is again given a chance to start with Furlan and Magatti on the wings. Other than that and Lucia Cammarano coming in for Giada Franco in the back row the team is little changed from the one that started so well against England before being overwhelmed in the second half

“We want to respond to after last weekend's result and during the week we worked a lot on the aspects to be corrected and on our strengths. With confidence in our abilities we can offer an important performance in Scotland” says Di Giandomenico.