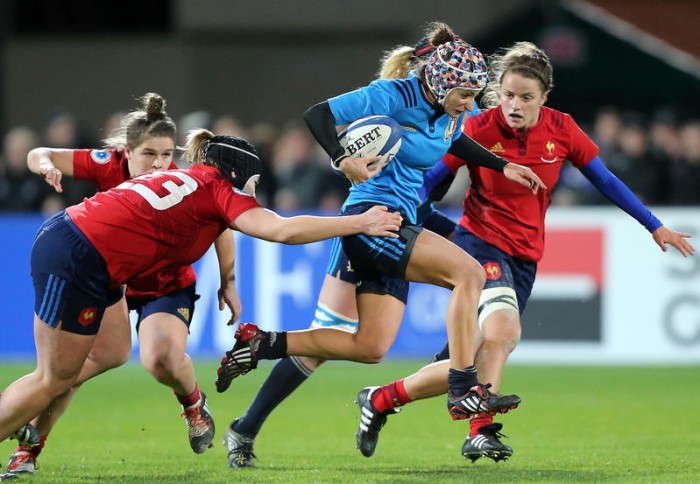 This is the big one for Ireland, who are getting better and better with each game. After a shaky start in Scotland, and a difficult opening 40 minutes against Italy, Ireland pulled out the stops at home to France two weeks ago, and go into the game tied at the top of the table. The 22-14 warm-up loss to Wales in Donnybrook in January seems a world away from where the team are now.

Wales, on other hand, seem to be going in the opposite direction. After impressive pre-tournament performances they saw off a difficult Italian team, but were then well beaten by England before losing dramatically to Scotland last time out.

Rowland Phillips makes seven changes the team that lost in Broadwood – a game where the Scots dominated possession far more than the score would suggest. Loosehead Caryl Thomas, number eight Shona Powell-Hughes, scrum-half Keira Bevan, fly-half Robyn Wilkins and wing Adi Taviner all come into the starting line-up. Two of the changes are positional, as Sioned Harries moves to the blindside, and Elen Evans goes from left wing to the right.

"This has been our most difficult team selection so far," says Phillips. "We got together for training on Saturday and certain players trained their way back into contention, which we were very happy to see."

The team was also hit by the tragic loss of Elli Norkett - to whom tributes will be paid prior to kick-off on Saturday - and Phillips acknowledges that managing the emotions on Saturday will be important. "We need to perform and keep our concentration, because we know what an emotional occasion it will be," he says. "Elli was important to so many people. It's fitting and right that we'll be able to pay our respects to her on Saturday, and we'll all be carrying our memories of her this weekend."

Ireland, on the other hand, make just four changes, including one positional, as Tom Tierney welcomes back Alison Miller, Sene Naoupu and Hannah Tyrell after their involvement with Ireland Women's Sevens in Las Vegas – which means Kim Flood shifts to full-back. Claire McLaughlin misses out through injury.

Tierney said: "The squad has been developing nicely over the course of the Championship, and while it was great to get the win against France in the last game, we haven't dwelled on that and have firmly turned our attention to the challenge the Welsh will give us.

"We are expecting Wales to be very much up for this game and there is set to be a big crowd in the Cardiff Arms Park on Saturday. With that in mind, it will be important that the players stay fully focused on their jobs and that we go out on Saturday ready to perform.

“We'd also encourage any Ireland fans that are in town for the men's game on Friday evening and are still in Cardiff on Saturday to come to the game and give the team their support."

A record 4,113 people watched the last game at the Arms Park (against England) – almost certainly Wales’ largest ever home Six Nations crowd. It will be interesting to see if that can be beaten.

In recent years this would have been a foregone conclusion, with England regularly recording huge wins over their northern rivals. But, on the back of two impressive performances against Wales and Ireland, Scotland are clearly much more than the team they used to be.

That said, they were well beaten in their previous away game in France, and the idea that they might upset the World Champions on their home ground seems unlikely.

Not least because England, at least from the second half against France to the second half with Italy, have looked like the unstoppable team of old – and to be honest against Italy they only started to look fragile when they were reduced to 13 players in a game that was already won.

In addition Scotland will be missing the inspirational figure of Jade Konkel, who is injured and will miss the trip. As a result Shade Munro has made four changes to the squad that beat Wales 15-14 in Round Three.

Sarah Bonar is set to start for the first time in the back row after five appearances as a replacement appearances in the second row. In addition Louise McMillan, who has also won five caps, will flank and Hillhead Jordanhill's Jemma Forsyth will attempt to fill Konkel’s No.8 shirt.

Forsyth's club colleague Abi Evans, who has been training with the squad during the Championship, replaces Lauren Harris on the bench for her first inclusion this tournament.

Shade Munro said: "The win against Wales gave the squad a massive boost of confidence and was reward for all the hard work they've put in. The players showed great character and composure to get the one-point win. While it was a solid performance in both defence and attack, there are still plenty of aspects we need to refine.

"We are under no illusion how difficult England are going to be given they are top of the table having won all their games in this year's Championship, but I have every faith our players will rise to the challenge and remain focused on improving our performance."

England welcome back Danielle Waterman and Lydia Thompson, who both missed the third-round match against Italy, Bristol winger Amy Wilson Hardy, the leading try scorer of the championship so far, and Worcester Valkyries prop Laura Keates are rested for the game.Aylesford Bulls prop Vickii Cornborough has been selected among the substitutes having not played in this year’s competition yet.

“We hold a huge amount of respect for Scotland," says Simon Middleton. "They secured a brilliant win from 14-0 down against Wales last time, having taken Ireland to the final play of the game in the opening round."

“Against Italy, our set piece and first phase execution were outstanding but we didn’t back that up with good decision making in phase play," he added. "That lack of continuity has been recognised among the squad and we know exactly what want to do to improve come Saturday. We are looking forward to what we expect will be a challenging contest and hope to have strong support from a good crowd for our last home game of the championship.”

It is a slightly surprising fact that France have not won in the Six Nations in Italy since 2011 – and even in 2011 and 2009 the games had been very close.

The reason seems to be that Italy relish nothing more than welcoming their neighbours and oldest opponents to their home, while something odd seems to happen to France almost any time they cross an international border (they were decidedly off form in Dublin two weeks ago).

It is puzzle that the new team manager, Annick Hayraud, and her coaches are determined to solve, commenting that “Les Tricolores” are a version "Jekyll and Hyde - capable of the best and the worst, sometimes in the same game

Responding to the defeat in Ireland she said "we are disappointed, the players and the staff alike, but we do not worry more than that. We build and move forward. We mostly lack consistency and need to fine-tune our project, but this is a group of quality players. The girls are listening and really want to work and progress. "

“We have rarely seen a team from France as convincing as the one who taught the English women a lesson in the first half at Twickenham… before collapsing in second ...”

“Maybe because of the fatigue because we worked hard so hard at the start,” suggests Samuel Cherouk, coach of Les Bleus alongside Olivier Lièvremont.

Despite the 55-0 win at La Rochelle against Scotland, the new coaching and management team were still critical, pointing out missed passes, missed catches, inaccurate kicking, questionable strategic choices and endemic indiscipline, all of which appeared against the Irish as well and contributed to the defeat.

"We will work on this the reasons why we forget to do what we had decided to put in place, but it is far from being a major drama," says Hayraud.

"We still lack ideas and do not know how to manage when things start to do wrong, but we have also seen some interesting things in terms of mindset and determination," says Samuel Cherouk. “The next two games of the Tournament must make it possible to get back on the right foot, to display more constancy, especially with perspective of the upcoming World Cup.”

France shuffle their team, with some more experimentation that sees Shannon Izar at fullback for the first time, and Caroline Boujard starting on the wing. Audrey Abadie also starts at 10 with Yanna Rivoalen returning at scrumhalf. Up front Céline Ferer starts with Lénaïg Corson on the bench.

Italy have yet to announce their starting team but the 23-player squad welcomes back Maria Grazia Cioffi, who has recovered from an injury suffered in the match against Ireland, while Valentina Ruzza is absent, injured.

The game will also have a special importance as for the first time the two teams will be competing for their own version of the "Trofeo Garibaldi", a version of which Italian and French men’s teams have been competing for since 2007.