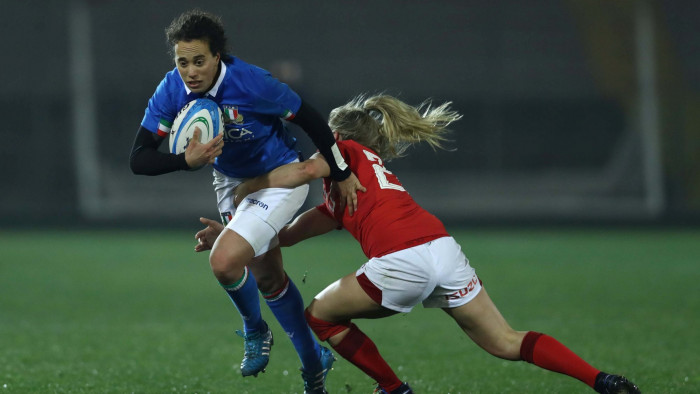 Ireland’s preparations have been far from ideal this week with coach Adam Griggs forced to make changes to his initial starting line-up due to Covid testing, though the players involved have all now been cleared to resume training after this weekend’s match.

Nonetheless this promises to be a fascinating clash, despite the fact that both sets of players will be considerably short of match practice.

Ireland’s team sees promising backrow Dorothy Wall start alongside captain Ciara Griffin, with the return of Claire Molloy alongside them bringing the home team a formidable strength at the back of the Irish scrum.

Griggs has selected Hannah Tyrell at the newish position of fly-half, and her talents will be tested with Italy also able to call on strong back row talent – notably Giada Franco who is back playing in Italy after some time with Harlequins in England.

The big news in the Italy team is the return of the experienced fullback Manuela Furlan who has been absent for 18 months due to injury.

She returns as captain to add to her 73 caps and there are five other changes from the last time Italy played against France – Veronica Madia and Aura Muzzo come into the side at fly-half and on the wing while locks Sara Tounesi and Giordana Duca are named in the pack and Francesca Sgorbini starts in the backrow.

Furlan said. “After a year and a half out, I really missed training with the girls,” said Furlan. “The truth is that just when you find yourself back with them you realise how much you have missed them.

“I found the group united and the enthusiasm is sky high. We can’t wait to take the field, especially I can’t wait to go back to helping my teammates out on the pitch.”

Scotland’s team sees Rachel Malcolm captain a side which includes one new debutant, with Rachel Shankland named on the wing.

Shankland is joined by Chloe Rollie and Megan Gaffney in the back three, while Lisa Thomson and Hannah Smith link up in midfield.

Lock Emma Wassell starts her 44th consecutive test and Bryan Easson reflected on the impact the big gap between games may have brought.

Scotland coach Bryan Easson said: “We obviously were due to play France back in March, so we’ve done a lot of preparation for this match, but we’ve changed a couple of things since then.

“France are a physical, combative side who will look to exploit any opportunity they can get, so we are focused on getting off to a positive start and using this opportunity to test ourselves under pressure.

“It’s been pleasing to see the players pushing for places ahead of the World Cup qualifiers and Rachel Shankland has been rewarded for her efforts over the past couple of weeks as she now looks to make her debut. It’s also great to have Megan Kennedy and Abi Evans back from injury.”

France have much greater recent match experience as their elite leagues have been running since the start of September, although some clubs have been able to play more than others.

The shutdown of the World Sevens has given France's management team a much larger pool of experienced players to work with, which resulted in a later team announcement than usual for France, as team manager Audrey Hayraud explained: "We had the chance to bring in players from the Sevens team so selection has been interesting and we have chosen a fairly large squad because we have four games."

France are aiming to shore-up their runners-up spot in this year's Six Nations having slipped to to third last year, but their real target for the autumn is the two tests against England. "There is a story to be finished after we were left suddenly frustrated at not being able to play", continues Hayraud. "We are lucky to be able to finish this competition. We want to ensure we take the second place which will allow us to work towards facing the English twice."

As we detailed in our article on France, with the inclusion of the sevens this is close their strongest possible side. Only two first-choice players are missing - Audrey Forlani and Romane Menager - and there is only one player in the squad without previous international experience.

Hayraud has been quite experimental for her starting XV for Scotand giving prop Rose Berndou her first cap and most of the younger players in the squad a chance to prove themselves. The bench is notably more experienced and it is here that we find Marjorie Mayans, whose to fifteens will be a key thing to watch for. If she can find the form she had prior to moving to sevens she will be a key part of France's World Cup bid.

Pauline Boudon starts at 9 but can be expected to move to 10 if and when Yanna Rivoalen comes on, which was normally the tactic when they formed a highly sucessful partnership before Rivoalen's injury.

Scotland fans will be able to watch all of the rescheduled Six Nations fixtures live on BBC ALBA.