Six Nations: State of the Champs

With two rounds to go in the women's Six Nations, we look at where the teams stand and how they will fare in the final games. 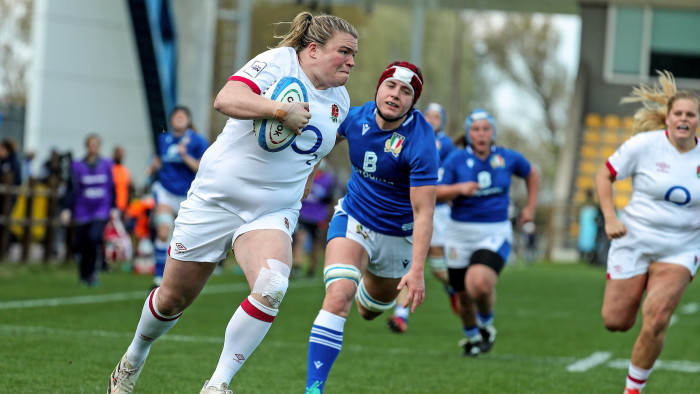 It is hard to keep churning out superlatives for an England side who have won 21 games in a row. They have strength in depth others can only dream about and the only way they will not win the Six Nations is if France play out of their skins next week and draw strength from the likely packed home stands in Bayonne. That remains a possibility because France are so good at home and can always get themselves up emotionally for games against England.

First of all though, Sarah Hunter’s team will likely break another record this weekend in Leicester in front of what’s expected to be a huge crowd in a game they should win handily against Ireland.

That England’s audience is growing is due in large part to what they do up on the field – dishing up a magnificent brand of both powerful and free-scoring rugby and all with a smile on their faces.

Even when things aren’t quite working for England, as they didn’t early on against Wales, they are able to mix things up, find another gear and accelerate away from teams who can only watch the blur of white shirts passing them by as they score try after try.

The injury to Abby Dow is a blow, but England can immediately call up Jess Breach, a reminder in itself of just how many good players they have in their ranks. It feels likely we will see a team this weekend close to England’s best, as Simon Middleton seeks to start finessing his team on the road to the World Cup and also of course Bayonne the weekend after.  With so much talent to choose from, few positions seem truly nailed down, so team selections for the final two games should be fascinating.

France have recorded three bonus point wins out of three but have so far failed to catch fire. They have certainly not looked like the team that beat New Zealand twice at the end of last year and though we have seen the occasional flash of French style, we have also seen them struggle to break down Italy and fail to score at all in the second half against Scotland.

But we have not seen France at their best in part because we have not yet seen France’s best team. Even taking into account injuries, the first three games have seen a lot of experimentation, with experienced players starting on the bench while younger players are being given a chance to start, and some established players are being played in different positions, such as Jessy Tremouliere at 10.

But we may well see the best version of France in these final two rounds. A revised squad has been announced for the final two fixtures with the return of Caroline Boujard being the most notable change and with Agathe Sochat also back after her partner had a baby.  In local interviews coach Annick Hayraud has promised the strongest starting line-up for Wales and England.

Gaelle Hermet has continued to be the glue of the team and as captain she has also been a standout player in the French pack alongside Celine Ferer while Laure Sansus has been exceptional at scrumhalf, with Pauline Bourdon still out injured.

The France of old would have been highly liable to a slip up in a fixture like the one against Wales this Friday night before what is being billed as a big finale against England, so how well they come through that clash should tell us a lot about where they are at.

Wales have undoubtedly been a different team to the one which lost every game last season, with contracts, new coaches and renewed interest all helping them to two wins so far and a brave battle against England. In short they are much improved and will get better.

France at home on Friday night will present a different sort of challenge but the Welsh will have watched how Scotland frustrated the French in the second half last weekend, keeping them scoreless, and will likely try and get under the skin of Annick Hayraud’s team who can get ruffled away from home.  Expect players like Sioned Harries, Alisha Butchers and Siwan Lillicrap to be at the forefront of this.

A big challenge for Wales remains their struggle to kick themselves out of danger areas and on Friday night, with Laure Sansus and Jessy Tremouliere in their squad, France will surely be looking to pin them into the corners in Cardiff and force them to play out or put their kickers under serious pressure.  However they go this weekend, they will be confident of another good result in their final outing against Italy, meaning a likely third place and excellent return compared to last year.

It has been thoroughly frustrating watching Italy in this year’s competition. They had a tough draw - away to France and then home to England – but put in a good performance against France at least and we all expected them to start hitting their stride from round three onwards.

Italy’s performance against Ireland was therefore surprising and disappointing. The team that looked most likely to finish third at the start of the competition now appear to be in danger of a wooden spoon.

There have been positives – the form of players such as Alyssa D’Inca and Beatrice Rigoni for example– but coach Andrew Di Giadomenico was far from happy after Ireland:  “It is not acceptable how we behaved on the pitch and we are not looking for excuses. Work is the only answer to restart, first of all on a mental level. The same athletes have always shown that they play good rugby: we need to find our game again.”

News about contracts for 25 players will have been a boost, but is unlikely to make any difference in the short term. Hosting Scotland at home is a good next game for the Italians though – they have a good record against the Scots having won 10 of their 14 encounters in the Championship and if they can play to their abilities, the final clash with Wales could be close.

Scotland have put in three good performances yet find themselves winless with a single bonus point. With Italy and Ireland to come you feel that there is every chance though that that win will come.

The Scots defence in particular has been good enough to frustrate both England and France at times – keeping the French pointless in the second period of their most recent game. They have also had the majority of the possession in all three games. Indeed the Scots have been ahead on most metrics apart from the most important one, that of the number of points on the scoreboard. Often little progress has been gained during the long periods when they have had the ball.

Christine Belisle has been in excellent form in the front row while the experience of Rachel Malcolm, Lana Skeldon and Jade Konkel have been important too.  Scotland will be well aware that a win this weekend would give them excellent momentum before a trip to Ireland to play an Irish side likely shorn of much of their best backs. Two wins would represent a good return.

Like Italy though, the Scots have ultimately been frustrating to watch, showing signs of improvement and excellence before lapses in concentration or failure to take advantage of chances that are a reminder that they are very much still a work in progress.

With a new-look team and new management it is perhaps unsurprising that it is taking this Irish team some time to find its feet and the win over Italy will have been a much needed boost. Ireland have had some excellent individual performances from Eve Higgins and Sam Monaghan in particular, but have not yet put it all together for 80 minutes.

They are in a unique position in the Six Nations because they are the only team involved in the World Series with a significant crossover of sevens players playing in the Championship. England and France have almost entirely separate squads while Italy, Wales and Scotland are not involved. That will become a huge problem for the final two rounds, with Ireland set to lose significant players like Amee-Leigh Murphy-Crowe, Higgins and Stacey Flood. It could well mean players starting against England this weekend who have barely featured yet at all and huge pressure on them at home against Scotland to end the competition with more than just one win.