USA women’s rugby 7s coach Ric Suggitt has included American soccer star and Olympic gold medalist, Natasha Kai in his squad of 14 players to travel to Dubai in early December. The group will train together this weekend at the Olympic Training Center in California to prepare for the tournament. 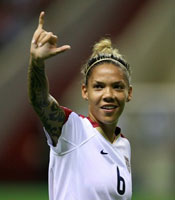 Kai is a star addition to the squad having gained recognition in the sport with the Hawaii Select side earlier this year in the Women's Las Vegas Sevens tournament.

Four of the other 14 players Suggitt invited to camp (Kelly Griffin, Emilie Bydwell, Katie Dowty, and Nathalie Marchino) are on the list of the top ten try-scorers at the highest level women's club competition in the United States, the Women's Premier League where they scored 31 tries between them.

Some up-and-coming college stars like speedster Rebekah Siebach, Kimber Rozier, and Deven Owsiany will join the team at camp after playing for the USA Women's Developmental sevens side at this summer's Emirates Airline USA Rugby Women's All-Star Sevens Championship.

Siebach, Rozier, and Owsiany were joined by Kaelene Lundstrum on the Developmental Squad, and the four youngsters combined for 22 tries in the All-Star Sevens tournament.