South Africa "back to the drawing board"

It has been a tough few games for Africa's representative in this year's World Cup. After steady improvement since their first tournament 2006, 2014 has been something of a set-back, especially their second round game against France. We spoke to a disappointed stand-in captain Zenay Jordaan and coach Lawrence Sephaka immediately after their second tournament defeat on Tuesday. 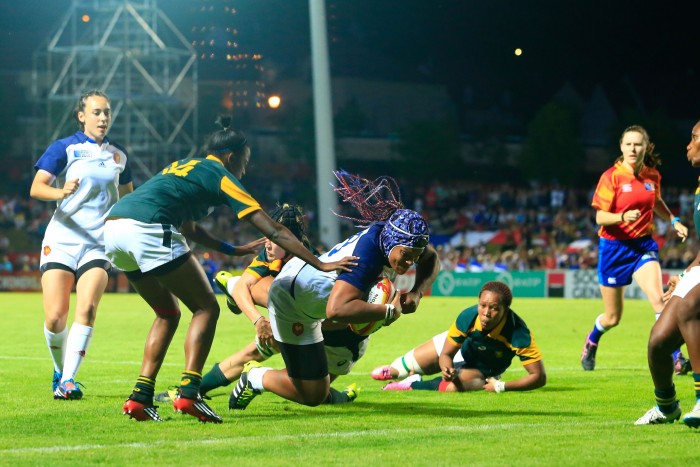 All players look tired immediately after the end of a match, especially at this World Cup, but Zenay Jordaan, stand-in captain of South Africa following the suspension of Mandissa Williams, looked utterly drained, emotionally and phsyically, when we saw her straight after her team's 55-3 defeat to France.

Speaking quietly and honestly she looked back on a tough start to the Springboks' campaign:

"Obviously we are disappointed by today's result and our performance. It's always tough to play a team like France, especially on their home ground. Even so we had some opportunities but we did not make the most of them.

"We always expected a tough tournament – we knew each game would be tough so we did not go into the tournament with mindset that anything would be easy, but the team is not very happy with their performances at the moment. It is time for us to go back to the drawing board."

"It's been a tough tournament for us in terms of playing. We have not been utilising our opportunities very well and we are letting ourselves down at crucial times, like today. I know a lot of our players will be disappointed.

"We went into this game with a lot of emotion and wanted to get more out of it than we got today - and what we got today is not satisfactory at all.

"The loss of Mandissa Williams [suspended after an incident in the first match] had a big effect, She is an inspirational leader, she keeps the team together. Some of the emotion of her suspension had an effect on some of the players, and we, and they, know our play is not up to our usual standard, This is not what we live by. We need to look at ourselves and have each every player ask 'did I commit myself enough today?' But they will pick themselves up."

Looking ahead to their final pool game against Wales, who will also be looking for a first win, Lawrence added:

"We will regroup and put this game behind us. I think we’ll bounce back. There’s a lot of hungry players in this team. We’re still representing our nation, and we are proud to be doing that. We may have beaten Wales in 2010, but that does not matter, that is history. They are a pretty good team, and their defence has been much better than ours in this tournament so far."