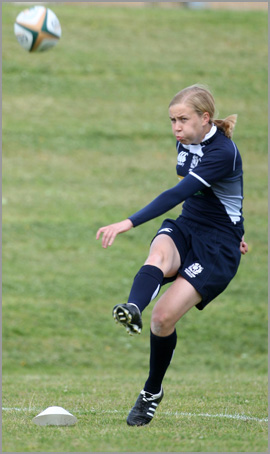 South Africa completed a 2-0 series win over Scotland with a 41-17 victory. A superb second half from the visitors was enough to secure their fourth international victory in a row as Scotland let a 14-7 half-time lead slip.

Scotland had made a number of changes after their loss last week and their early endeavour paid off as they dominated the opening exchanges.

The home side were led out by Lynne Reid, celebrating her fiftieth cap, who was on the bench for this game with Lucy Millard the skipper on the pitch.

Reid's side took an early lead with Melrose full back, Nicola Halfpenny (pictured) slotting a penalty but the South Africans hit right back after some poor Scottish handling allowed Mandisa Williams to pounce on a loose ball to cross the line.

The try was converted by Zandile Nojoko to edge the visitors ahead after fifteen minutes, 3-7. Five minutes later the run of play had swung back in Scotland's favour as Halfpenny added another penalty.

The Scots were dominating the tight exchanges now with a series of solid pick and goes close to the line and their efforts turned into points with prop Heather Lockhart scoring a try.

South Africa then went down to 14 players as centre centre Daphne Scheepers sin-binned before half time.

The home team though went further ahead just before the turnaround as Halfpenny scored another penalty for a 14-7 half-time lead.

Halfpeny continued where she left off with another penalty immediately in the second half but that was to be the last of the scoring for the Scots as South Africa launched an impressive comeback.

Nojoko kicked a penalty to bring her side back within reach and the South Africans defence showed it was up to scratch after new Scotland cap Katy Green made a super break which they recovered from and countered to score their own try with Lorinda Brown grounding the score which went unconverted to narrow Scotland's lead to two points.

Scotland's most capped rugby player, Donna Kennedy (110 caps) then made way for Lynne Reid to gain her fiftieth cap, to applause from the sun-drenched crowd.

They kept their foot on the gas then with another couple of tries (Jordaan, 61 minutes) and Momoti (75 minutes), the second converted by Nojoko.

South Africa coach Denvar Wannies was satisfied with the series win: We won because of our better conditioning and by applying the basics in the second half. We knew Scotland would come with passion and commitment and they did not disappoint us.

However, we allowed them to dictate matters for far too long and then we also had a yellow card just before half time. We can draw a lot of inspiration from our second half performance and I feel that overall, we did much better that what we hoped for,."

Scotland coach Gary Parker said: When the South Africans got their momentum in the second half, we could not break their flow. We did a lot of good things and the scoreboard might not reflect that. I know a lot of the girls are really hurting by that result.

The South African squad will be selected for the Rugby World Cup this week, followed by a non cap international against Ireland on Sunday 18 July (kick-off 1pm at Lasswade, admission free).