South Africa have won the African Sevens Championship – but the gap is closing. 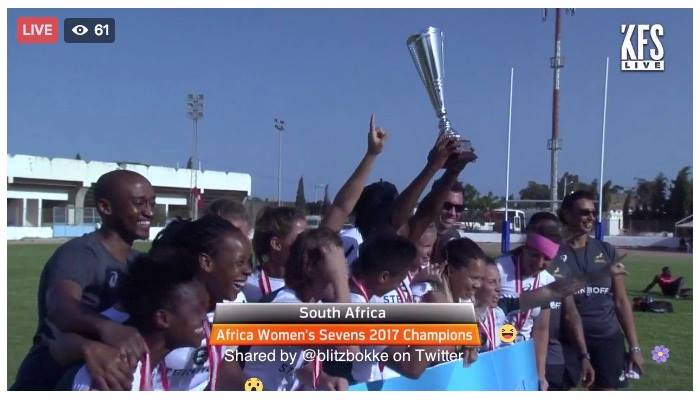 As well as the continental championship, three other matters were decided in Tunisia this weekend:

South Africa and Kenya were by far the strongest teams on day one, each only conceding a single try on their way to the top two seedings. However, Madagascar also impressed beating Zimbabwe to end runner-up in Pool B, and moreover winning third seeding for the quarter-finals, while hosts Tunisia took the fourth seeding spot.

On day two both South Africa and Kenya reached the semi-finals with ease. Sinaida Aura scored four tries as Kenya beat Morocco 47-0, while South Africa cruised to a 43-0 victory against Senegal in the Cup quarter-final as they showed intent on attack. In other games Madagascar – the surprise team from Day one – were surprisingly beaten by Uganda, and Zimbabwe lost to Tunisia.

South Africa achieved another shut out in their semi-final against Uganda in the first semi-final. In the second semi-final Janet Okello opened the scoring for Kenya with Janet Owino adding the extras but the hosts Tunisia equalized just before the break for a 7-7 score. Kenya would be reduced to six players after winger Sinaida Aura was sent to the bin but Tunisia failed to take advantage, before Okelo and captain Phila Olando won it for Kenya 24-7.

In the final South Africa took an early lead via an unconverted try but Kenya hit back through Sinaida Aura and Janet Okello, leading 12-5. But as in the semi-final, discipline let them down in the second half - and this time it did not go unpunished, South Africa scoring twice to win the tournament 17-12.