South Africa made up for the disappointment of being relegated from the World Series last month by winning the African Sevens Championship in Johannesburg last weekend, thereby becoming the ninth team to qualify for the Rio Olympic. Kenya, Tunisia and Zimbabwe will take part in the World Repecharge next year. 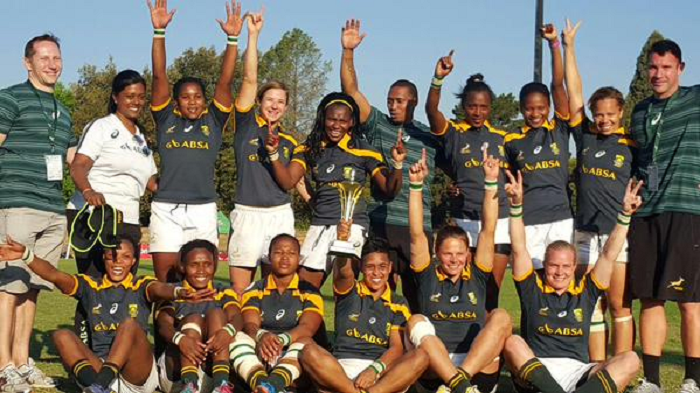 With ten teams taking part the tournament was the largest ever seen in Africa, in no small part due to the funding received by many countries from their National Olympic Committees. Despite this, the funding of tournament preparations for many national squads was a common theme in media coverage leading up to the tournament, impacting even leading teams such as Zimbabwe (where training camps cancelled or curtailed) and Kenya (who had leave their journey to South Africa to the last minute to reduce costs).

As a result South Africa’s position as the giant of the region is unlikely to be seriously challenged for te foreseeable future. Well-funded (especially compared to their hosts), they have more players to choose from than all of rest of Africa put together. In addition, for this tournament, they were given home advantage.  The result was a tournament win as comprehensive as it was expected, with the ‘Boks scoring 265 points in six games while conceding only a single score (and that in the final).

However, there was more at stake in this tournament than the overall title, as three places were also available for the “repecharge” tournament in June – and the competition for these spots was anything other than predictable. The weekend with four teams expected to be in contention for these places – Kenya, Tunisia, Uganda, Zimbabwe – but even here there was a surprise in store.

With South Africa were breezing through Pool A, Zimbabwe and Uganda found themselves drawn to meet each other for what was, in essence, a quarter-final for their opening game. Historically Uganda have had the advantage, but last year Zimbabwe finished above them for the first time, and this weekend they maintained that advantage with a crucial 19-5 win. As a result Uganda were left with having to beat South Africa in their final pool game to keep their Olympic hopes alive, but – though they played well – they were unable to have much impact on the Springbox juggernaut, going down 39-0, with Phumeza Gadu,  looking deadly when given any space, scoring a hat-trick.

As expected Kenya, winners of Pool B, and Tunisia joined South Africa and Zimbabwe in the semi-finals – but not without a scare from Madagascar. With only a couple of previous African tournaments to their name (where they had not finished above sixth), Madagascar very nearly recorded a huge shock in their opening game with Tunisia hanging on to win 15-12. Impressive wins followed against Senegal and Botswana, but they finished having to beat Kenya to knock out the Tunisians and that was a step too far, Kenya winning 33-0.

However Madagascar went on to win the Plate, finishing in a best-ever 5th, beating Senegal in the final after the latter had come from behind to beat Uganda in extra-time. The Ugandans, who started with hopes of a top four finish, have to be content with seventh place.

The cup play-offs were, in comparison, somewhat disappointing one-sided affairs. South Africa and Kenya were untroubled by the challenges of Tunisia and Zimbabwe respectively (34-0 and 39-0), with Tunisia finishing third with and equally decisive 33-0 win over Zimbabwe

In the final Kenya began well, taking an early 5-0 lead. Gadu, however, soon levelled the scores after which it was business as usual with Gadu adding two more as her team ran out winners by 31-5.

*Curiously the SARU, in their coverage of the win, do not say that their team will be going to Rio, only that they have “met the Olympic qualification criteria” and emphasise that “the decision on whether the team will go to the Olympic Games will be made by the South African Sports Confederation and Olympic Committee”.