South Africa are well on their way to returning to test rugby after their three-game tour to England. 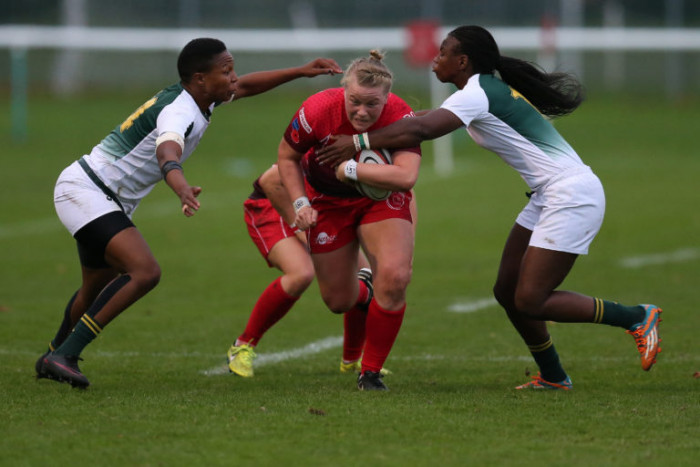 They may be returning to South Africa with just one win in three games, but South Africa Select learnt a lot and improved noticeably over their week, playing three games against strong representative opposition

The tour began against the British Army XV – a team that regularly plays international opposition and which would have a rank almost exactly where South Africa currently lie, if they were a national team.

The star of the opening games was hat-trick hero, winger Unathi Mali, who was key in an impressive 27-5 win in Aldershot on the first Saturday.

South Africa took the initiative from the start, with two quick scores that had them 10-0 ahead before the quarter-hour, Mali – a sevens squad player - making both scores. The Boks shook the Army team with their strength and power to begin with, but the Army had superior speed. Ill-discipline also cost the visitors two yellow cards - Mali and centre Zinhle Ndawonde receiving yellow cards for a high tackle and a breakdown infringement respectively - and with that a score by the Army’s Findy Parker. 10-5 was the halftime score.

The South Africans continued to dominate possession, but only in the final 10 minutes did they find a way through, with three late scores against a tiring opposition. 2014 Women’s Rugby World Cup lock Celeste Adonis crossed the whitewash for their third try, after which Mali earned her hat-trick late in the half, despite the team receiving their third yellow card minutes before, after which for replacement flanker Kamohele Makoele added a fifth try on the stroke of fulltime for the satisfying 27-5 victory.

“Our goal when we left South Africa was to win our first match to build momentum and confidence, and I am very proud that we managed to achieve that,” captain Nolusindiso Booi Booi said after the game. “We took positives and negatives from the match, but the important thing is that we learned lessons during the game and we hope to carry that through into our next two matches.”

“As a team we now have a good idea of what to expect going forward and also what we need to work on, so we will continue working hard at training in the next few days. The win against the British Army was a good start to the tour, and it is up to us to build on that.”

The match had attracted a good crowd, and it is unfortunate perhaps that the remaining two games - officially “behind closed doors” fixtures against England Academy selections – were not widely advertised.

However, four days later coach Eddie Myners was rather more disappointed with his team after their 47-12 defeat against the England Academy team, also at Aldershot.

Myners’ charges delivered a strong first-half performance, despite lock Amy-Kay Klaasen receiving a yellow card, as flanker Rights Mkhari and No 8 Aseza Hele crossed the tryline, while flyhalf Kirsten Conrad added a conversion to match the hosts’ 12 points going into the break.

England Academy, however, came out strongly in the second half as they applied constant pressure on attack, which saw the visitors defend for most of the half. The hosts were also effective at rounding off their point-scoring chances and this paid off with five second-half tries, which took their tally for match to seven.

“We knew from the outset that this match would be much tougher than the clash against the British Army, and although we are very disappointed about the defeat, we learned a lot and there were a few positives we could take from the clash,” said Myners.

“We delivered a solid first-half performance, and even though the opposition dominated the second half, our players kept on fighting and never gave up.

“We have a lot of work to do before our last match, but fortunately we have a few days to improve on the areas of our game that let us down.”

But four days later Myners was much happier, predicting a bright future for the team after suffering a narrow 15-12 defeat – again against the England Academy in Aldershot, England, on Sunday 22nd October.

The hosts entered the break 7-0 ahead after being awarded a penalty try, but two second-half tries by SA Select’s No 8 Kamohelo Makoele and replacement looseforward Aseza Hele within seven minutes to only one by the hosts, left the teams tied on 12-12 in the dying minutes.

The SA Select’s hopes of finishing the tour on a winning note, however, were dashed in the last minute as the home team slotted over a penalty goal to secure a nail-biting 15-12 win.

“Our team went from strength to strength on this tour,” said Myners. “We played against a well-prepared England Academy side after facing the British Army, and it was great to see the players make such a big step-up in each match.

“We proved in the last few weeks that in a short space of time we could develop a solid unit and one that could compete against a leading nation in women's rugby.

“This was our first taste of international rugby in three years, and I believe the future looks bright if we can keep improving as a side going forward.”

Myners was satisfied with the team’s performance in general on Sunday, and he made a special mention of their set pieces and defence.

“As a coach one will never be happy about a defeat,” said the coach.

“But I am very pleased with the quality of the team’s performance. To lose against such a classy outfit in the last minute due to a penalty goal illustrates the effort the players put in on the field.

“I felt that we dominated in every area of the game, but unfortunately we couldn’t convert our chances into points. Our scrums and lineouts were particularly solid, and we showed real commitment on defence, which was pleasing.”

With the tour over, Myners was positive about the future of women’s 15-a-side rugby in South Africa and said: “We made big strides in England, and if we can continue building on the structures in place and test ourselves regularly with opportunities such as these, we can make women’s rugby in this country special.”