A South African Select side held off France Development to take a 14-7 win and take out the Hong Kong Women's Rugby Sevens at Hong Kong Stadium. 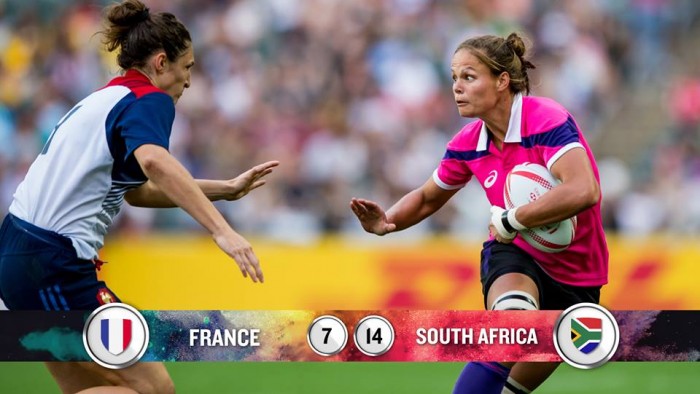 In the process the southern hemisphere women became the first South African team to reign victorious in Hong Kong, with the men yet to lift the crown there.

South Africa looked the best team throughout day two and delivered when it mattered in the final, with Zenay Jordaan and Marithy Pienaar scoring the tries. With a number of senior players out, South Africa coach Renfred Dazel praised the work of his up-and-comers.

"The youngsters pulled something out of hat," Dazel said. "The girls deserve it."

Dazel acknowledged the efforts of his entire defence and singled out Nadine Roos for her brilliant work after a day of cut-throat matches.

"This morning we started in a must-win situation against France and we beat them," he said.

"The outstanding players were the youngster Nadine Roos and Marithy Pienaar."

South Africa had earlier defeated Japan 19-10 in an entertaining semi-final after grinding out a 7-5 win over the previously undefeated France to lock in their semi-final berth.

Hong Kong came agonisingly close to making it to the final, pushing France all the way and creating a number of opportunities in a 5-0 semi-final loss.

Stalwarts Aggie Poon Pak-yan and Natasha Olson-Thorne led the way, with a particularly gutsy effort from Olson-Thorne in the final minutes nearly leading to a try.

"We needed to be a bit more patient in that first half, but I'd rather have an endeavour than them not trying."

Richards was proud of the way her charges handled themselves, but rued an early mistake that cost a try.

"It's a two-day tournament and if you're slightly off, it's a cruel game," Richards said.

"14 minutes. You make one mistake and it's very hard to get back from that."

Hong Kong went on to finish the tournament in fourth place, losing the third versus fourth play-off 10-5 against Japan.

Earlier in the day, Hong Kong staved off a physical Japan side to book their semi-final berth, fighting back from 7-0 down to snare a gutsy 14-7 win in their final pool match.

Poon continued her brilliant tournament with the opening try, before Nam Ka-man put the home side in the lead in the second half.

"We didn't start very well but I suppose that shows we are actually improving because we kept our composure," Richards said.

"We went down early and our defence kept us in it. We didn't touch the ball for long periods but we maintained our composure."

China won the Plate final 7-5 over Kazakhstan to cap a much improved second day, while Kenya ran out easy winners in the Bowl, defeating Sri Lanka 29-0.