South Africa won the Roma Sevens last weekend. Dominant from start to finish they failed to concede a point 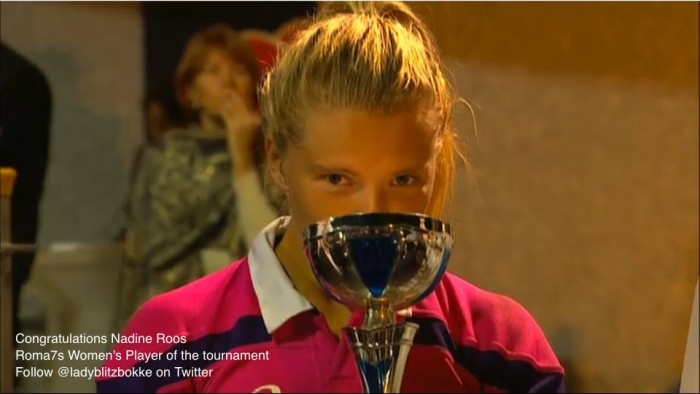 Since the growth of the World Series and the expansion of the European Grand Prix the Roma Sevens has struggled to find a spot in the calendar, but this year revived its women’s tournament with five teams. Two from Italy – Spinoze and Italy’s “A” team – plus three national teams, Olympic-bound Kenya, Olympic hopefuls Venezuela and African champions South Africa

However, it was very quickly clear that the two African team were far stronger than the rest of the field

Tournament, and no surprise when they met in the final on Saturday evening. In that game South Africa’s greater experience was too much for their East African rivals, an dthey swept to a comfortable 40-0 win

South Africa’s coach Renfred Dazel, was pleased with the result: "We had a number of injuries coming here and lost even more players here, so to win was a massive effort from the team," he said. "I am very pleased that we could finish the season like this. We introduced new players this year and are looking to bring in more, so a win brings good publicity to the team. If I look where we were when we played in Dubai and where we are now as a squad, I think we improved a lot. We definitely moved forward as a group and in the way we compete,"

Nadine Roos, who was named Player of the Tournament, handed all credit to the team. "We had to stick together and work as a team," said Roos. "The support everyone gave and showed was a highlight for me at this tournament. We achieved success because of everyone's willingness to serve the team first."

Shamiah said, “ It has been a good outing for the team. We have been able to put into practice many of the things we learnt during our two week training camp in France, and have also been exposed to various elements of the game.We may have posted big scores in the matches, but we were playing against top opposition such as Venezuela who will be playing at the Olympic Repêchage and Italy who are regular participants at the European Women’s Sevens Championships which is played annually in a series format. These results were a huge eye opener in terms of what we can attain with a lot more exposure and better preparation which will enable us fulfill our very rich potential.”

Commenting on the loss to South Africa, Shamiah said, “They were ruthless from start to finish. They saw our weaknesses and punished them. It is up to us to show that kind of ruthlessness and hunger every time we step on to the field. With a lot more participation and exposure, we can surely attain that.”