South Africa wrap up the series

A superb second half performance helped the South Africa women's team to a convincing 38-0 over Kazakhstan in Dubai. 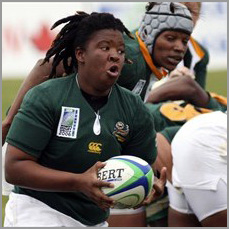 The victory means a 2-0 series win to the South Africans who led 11-0 at the break in this game, and scored 27 unanswered points in the second half. South Africa had won the first game between the two teams on Thursday afternoon though that game was a much closer 22-17 contest.

In that first game earlier in the week the Kazakhstan pack had dominated and tries came out wide from Luydmila Sherer and Svetlana Zhernovnikova early in the match. South Africa had battled hard to win that game in the second half though and they continued where they left off here, with captain and flanker Mandisa Williams (pictured) leading by example up front.

Right wing Ziyanda Taweleni scored the first try of the match after the ball went through several phases, with fullback Yolande Meiring sending Tawaleni over after drawing the cover defence. Meiring added two penalties before the break.

Jordaan, playing in only her second international, was switched from centre to fly half late in the game and she capped a fine performance with a brilliant individual effort after she sliced through the defensive wall to sprint 40m for her try.

Coach Denver Wannies said We came here with the idea to give some new players the opportunity to play at Test level and in that respect we achieved our goal. I am pleased with the performance of newcomer Nadene Botha at loosehead and Zena Jordaan showed great promise at fly half.The matches gave us a great opportunity to test our progress and our readiness and we will continue to work so we can be ready for the World Cup in August, said Wannies.

The two defeats will be tough to take for Kazakhstan coach Valeriy Popov and his squad but they will serve as good preparation for the World Cup where they will face host nation and final favourites England in their pool.