Spain announce their Team of the Decade

Over the past few weeks the Spanish Rugby Federation has been using social media to vote on a shortlist of players for each position in their "Team of the Decade", and today they announced their final XV. 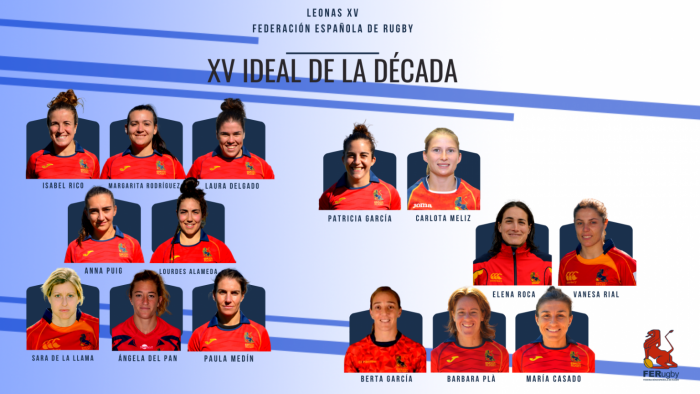 With the European Championship just around the corner, the Spanish Rugby Federation has annouced its Team of the Decade, chosen by the Spanish rugby fans using polls run onvia Twitter and Instagram. Each poll had a shortlist of four candidates for each of the position. .

National coach José Antonio Barrio,believes that "choosing a XV of the decade is very difficult. Many of the players in the shortlist have been to several World Cups. Without a doubt, they have all done a lot for Spanish rugby, and have contributed in large part to the fact that from the start until today we continue to rub shoulders with the best."

"It is a friendly exercise," Yunque adds, "and above all serves to remind fans of the great athletes who have been part of the national team. I would be unable to choose from so much talent. After all, many have laid the foundation for today's women's rugby in our country."

"In the front row is the present and future with Isabel Rico, Margarita Rodríguez and Laura Delgado, better known as Bimba. The three have played together on many occasions and constitute a fearsome wall that has made opposition scrums suffer. If it weren't for the Talaverana and captain of Las Leonas, Isabel Rico being injured, this lineup could well be one of Barrio's options for the Europeans.

"The second row also looks very modern,comprised of Anna Puig and Lourdes Alameda. The 21-year-old Catalan player has made the position her own with the Lionesses and since her debut at the 2018 European Championships she has hardly missed practically any matches.

"In the back row Angela del Pan and Paula Medínare joined by with Sara de la Llama, who is remembered for her physicality and defensive involvement.

"Joining the forwards and the three-quarters are the pair  Patricia García and Carlota Méliz. Patricia Garcia has been one of the most outstanding players in both rugby formats since her emergence in 2010 and has become a leader on and off the field, promoting rugby and its values with its philanthropic projects led by Rugby Libre. After playing in Spain, France, New Zealand and Japan, this season she has collected in the Chiefs of the English Premier 15. Carlota Meliz's career also aimed too high, but has suffered from injuries. The young flyhalf stood out with her talent for reading the spaces, combined with great speed and fantastic decision-making as a game director.

"The centres have a Galician flavourin the form of Elena Roca and Vanesa Rial. Elena, one of the pioneers of rugby in Galicia always saw rugby in a very modern way, which she now applies as a magnificent coach. Vanesa was not a natural talent, she played both XVs and 7s selections until injuries took her away from the game, but also she is still linked to rugby as a U18 women's rugby 7 coach.

"Finally, the team is completed with three of our Olympics team from Rio: Berta García and María Casado in the wings,and Barbara Pla as full-abck. Berta is probably one of the most outstanding rugby players in Asturias. Her physical ability and presence took her from England to New Zealand, and wherever she went she made her mark. In the story of the Lioness Maria Casado is instead a story of hard work and constistancy. Still active, she combines her role as a player with that of coach and physical trainer.

"The surname Pla is probably one of the best known in national rugby, and when we put Barbara's name in front of it we get a player who has certainly scores, and continues to do so after 17 years in action. From back row to full back, rugby XV, rugby 7s, World Cups, 6 Nations, Olympic Games... Nothing has resisted her undeniable talent, which we would surely all want to have on our team."