18 months ago Hong Kong's first trip to Spain resulted in two half-century pummellings. It was a very different today in Valladolid in today's warm-up for this weekend's full test. 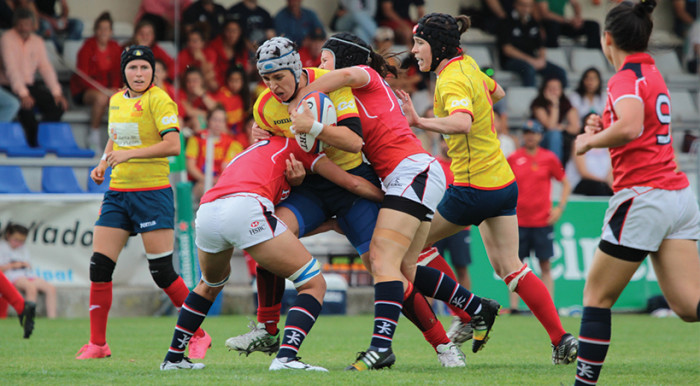 Spain’s 19-8 victory in this morning’s warm-up match ahead of Saturday’s test (3 June), shows that Hong Kong’s preparations for their debut appearance in the World Cup later this summer are progressing, but coach Jo Hull has warned her squad that it is not enough.

On its 2015 tour to Spain, Hong Kong lost both encounters, allowing the hosts to post at least 50 points in both the warm-up match and the test.

“If you compare that result to 2015, it was a much, much better performance, but honestly we are a bit disappointed, as we could have won that game,” said Hull.

“We trailed 12-8 through 70 minutes and let ourselves down at times with some poor defensive efforts, including giving away a cheap try at the end of the game. The message we gave the girls after the game was that we have got to set our standard higher and have the belief that we are here to win these games and not just survive them,” said Hull.

Hong Kong blunted the Spanish attack with a good rush defence and some strong loose forward play. The most visible blots on the copybook were Hong Kong’s performance in the scrum – Spain repeatedly dismantled Hong Kong’s pack, a few patchy periods on defence and an inability to alleviate pressure in their own half.

Spain’s dominance in the scrum will be a worry for Hull as she prepares her side for Saturday’s game: “It’s hard to get anything going when your scrum is going backwards like it did, so that is something that we will be focusing a lot on in the coming days, as well as our ability to get out from under pressure and play more rugby outside of our territory,” said Hull.

On the positive side of the ledger, Hull was pleased to have had an opportunity to give all of her debut players a run-out.

“We had five players making their senior debut, many of whom played well and will be involved in the World Cup. That is good as we need to expand that base and can’t rely on the same old players to keep stepping up. We were also able to try out some different players in different positions, like having a very young fly-half in BB [Lee Tsz-ting] on the pitch,” added Hull.

Spain jumped out to a 5-0 lead after a frenetic first ten minutes when they dominated possession and territory and were able to bring their physical advantage in the forwards into play with repeated short passes and carries by their towering loose forward trio. That pressure told true in the 8th minute when the Spanish flanker crashed over for a try from a tap and run penalty in close to the Hong Kong line.

After weathering the early pressure, Hong Kong righted ship and crossed into Spain’s territory for the first time. As the match wore on, Hong Kong’s belief grew and they managed to gain parity in the possession and territory stakes for the remainder of the match.

Hong Kong capitalized on its first scoring opportunity when Colleen Tjosvold struck a penalty after Spain was pinged for off-sides by Hong Kong referee Tim Baker, preparing for his own appearance at the Women’s Rugby World Cup.

Undaunted, Spain replied three minutes later with their second try, this time coming through the backline as the hosts capitalised on a defensive lapse to score an easy try between the centres.

Heavy rains took their toll with both sides playing each other to a standstill as the scores stood at 12-8 at half-time. The stalemate continued deep into the second half with both sides liberally using their benches as they examined options and combinations for Saturday’s test.

Spain were the only side to score in the second half as they turned possession into points in the 74th minute with a second try from their open-side flanker.

Outside of the scrum, Hong Kong’s line-out was strong and the forward pack proved the equal of their opposition in the loose play, with the starting back row of match captain Amelie Seure at No.8 and Cheng Ching-to and Chan Tsz-ching, on her Hong Kong debut, putting in a strong performance.

Hull also had opportunities to debut a new lock pairing in Tsang Sin-yan and Eunice Lai Ming-yan and blooded all five of her uncapped players with Laurel Chor starting on the wing and prop Pun Wai-yan coming on as a substitute for the injured Lee Ka-shun late in the first half.

“Both locks played really well, as did Chan Tsz-ching. She was very physical and did a good job. In the backs, Chong Ka-yan was strong in both attack and defence and Colleen [Tjosvold, who scored all of Hong Kong’s points with a try and a penalty], was a standout. She really stepped up her game,” said Hull.

Saturday will now be a test of resolve for Hong Kong as they come up against the full Spanish national team, currently ranked seventh in the world. In 2015 Spain found another gear in the test match, which they won 59-12. Hull understands that a backlash may be coming and will be focusing the squad on that likelihood:

“The first match was an eye-opener for both teams. Spain will make some changes and I expect to see more of their senior players on Saturday. I am sure that they will want to be even more physical and it will be crucial for us to stop them from getting a good start and building any early momentum.

“Yes, we have made progress since 2015, but now there is a risk that we sit back and are content with that. We know that we are not good enough for the World Cup right now and I am interested to see how the squad responds to that in the test,” Hull concluded.