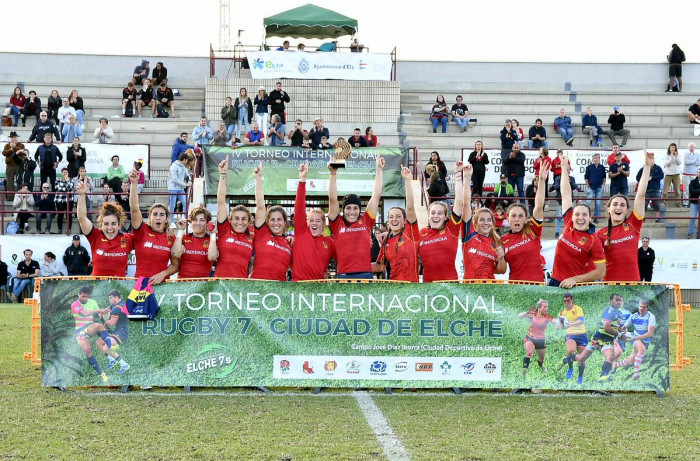 Spain reversed an earlier pool defeat to beat Ireland in the final of the Elche Sevens, which this year featured strong squads from England, Ireland, Spain, Belgium and Netherlands.

In Olympic qualification year, any meetings between Spain, England and Ireland will be of interest as – on current form – it is likely that these three will be competing for the final repecharge Olympic spot next summer.

Spain entered just about their strongest squad in this tournament, with many of their extended squad also appearing for “Viator 7s”. England and Ireland entered younger squads, but these were still strong teams with the majority of players having World Series experience.

To round off the competition Belgium and the Netherlands also entered squads that are likely to feature strongly in next year’s European Championship and, for Belgium, the World Series qualifier.

After the withdrawal of two French teams, the tournament was reorganised into a single six-team pool, with the top two going straight into a final.

Spain and Ireland open strongly against Netherlands and Viator, but Belgium put in a good performance against England, taking an early lead through Pierson Margaux before tries from Jess Breach (2) and Deborah Fleming turned the game England’s way.

England saved up their best performance of the weekend for their second game against Ireland, based around an excellent first half that saw England lead 26-0 at halftime, Ellie Kildunne, Lizzie Adam, Holly Aitchison and Fleming all on the scoreboard. Ireland came back a little in the second but in the end, England came away with a deserved 31-10 win.

With Spain beating their invitational team 31-0, and Belgium winning an exciting 21-19 game against Netherlands (the lead changing hand six times), only Spain are England were unbeaten after two rounds.

The two met in the third and final round of Saturday’s opening day, and it was Spain – lead by Patricia Garcia, back in Spanish colours after her sojourn in Japan – who won the day, Garcia contributing 12 of Spain’s 21 points as they beat England 21-7. In the next game Ireland also – and ultimately crucially – thumped Belgium 41-14, Eve Higgins and Anna McGann scoring three tries each.

Sunday opened with England comfortably beating Viator 29-14, but Ireland were now on a roll and swept past the Dutch 38-0, Eve Higgins and Hannah Tyrrell scoring twice each, and Spain beat Belgium 31-7, Patricia Garcia scoring three.

Spain and Ireland met at the start of the final pool round – and the young Irish team came out on top, Eve Higgins again on form with 12 points as Ireland swept into 24-12 win, which also put them into the final with four wins, and a better points difference than Spain, who also had four wins.

England played next and, after having started the day likely to reach the final, now faced the challenge of not just having to beat the Netherlands but also having to do so by 41 points.

England scored almost straight from the start and raced to a 24-0 lead at half-time with four tries, two each from Kildunne and Fleming. The scoring continued, taking England to 38-0 after 10 minutes, only one more try needed to reach the final. But with two minutes to go Bastienne Oonk broke away to score for the Netherlands – and then a minute later repeated the feat. Helena Rowland scored once more for England from the final play, but their 45-14 win was not good enough to reach the final.

After the high scoring in the pool games, the final turned out to be a tense affair decided by the only try of the game, Ingrid Algar scoring for Spain with just three minutes to go.