Spain won an expected European Championship this weekend with a largely young team that will be at the centre of their attempts to qualify for the 2021 World Cup. 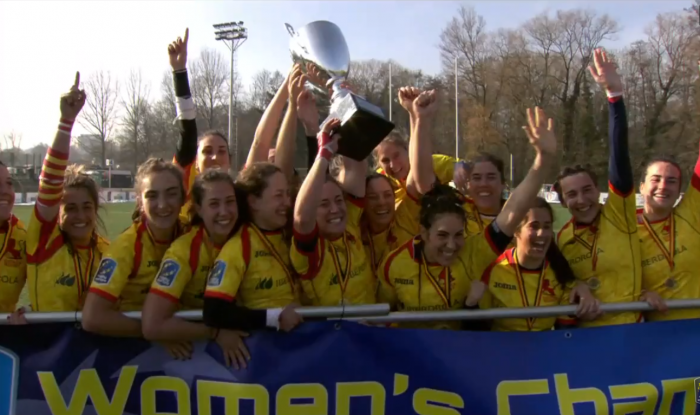 The predicted final, moved from Petit Heysel to the artificial pitch at the Nelson Mandela Stadium due to weather conditions, was for most of the first half a very even battle before Spain ran away with the game in the second half.

The snow had largely disappeared, but it was still a cold afternoon in Brussels. Spain took the initiative from the start, and despite impressive Dutch defence opened the scoring after nine minutes, Isabel Rico driving through Dutch line. The Spanish lead was doubled nine minutes later, Anne Fernandez diving to score at the foot of the post. 14-0

The game was far from one-sided, however, and the Dutch struck back on 24 minutes, wing Bastienne Oonk finding space to score in the corner, with a well struck conversion cutting Spain’s lead to 14-7.

The speed of the Dutch backs remained a threat to Spain, but strong Spanish defence coupled with handling errors ensured that Spain remained on top – and a third try from Iera Echeberria on the stroke of halftime ensured that Spain went into the break with a more comfortable lead of 19-7.

Spain ran away with the score in the second half, but again the Netherlands had their opportunities. After Laura Delgado added a fourth Spanish try early in the half, the Dutch spent a long period in the Spanish half without success, but as soon as Spain returned to the attack they scored again. 29-7.

A penalty after 65 minutes from Maria Ahis took Spain over three converted tries ahead of the Dutch, effectively ending any doubt over the result, but a great break by Alba Vinuesa set up one a try from Carlota Meliz before one more penalty from Ahis ended the scoring.

In the end it was the result that everyone expected, though the difference between the two teams was certainly no reflected in the score. In most areas of the game the Dutch matched the Spanish – especially up front where, if anything, they were the stronger. But the superior international experience of the Spanish (Iera Echeberria was outstanding) and a well marshalled defence ensured Spain’s title.

The sterling efforts of the organisers the evening before battled to ensure the game went ahead despite a snowstorm earlier in the day, but the cold conditions and largely snow-covered pitch had a significant influence on this third-place playoff.

With relegation to the 2019 European Trophy awaiting the loser, this was a far more significant contest than most tournament playoffs, and pitched Belgium, hosts and 2015 European Trophy winners, against Germany, who reformed less than two years ago and were the tournament’s fourth seed.

The relative performance of the two teams against opponents such as the British Army also suggested that Belgium began as favourites, but the conditions helped produce a game that largely favoured the more powerful German pack.

The result was deadlock for the first half-hour, with neither team able to take advantage of the high error count the result of frozen field, cold hands, and a slippery ball until on the half hour a German turnover on their own 22 resulted in an attack down the left wing that finally broke the deadlock, Steffi Gruber keeping her feet to open the scoring. The score at halftime was 7-0 to Germany.

The decisive blow for Germany came two minutes into the second half, Steffi Gruber again responsible, side-stepping through the snow and the Belgian line to score under the posts. 14-0.

Within five minutes a third German try, the power of Germany’s pack to the fore, and prop Jessica Neues getting the score. 19-0

On 57 minutes Belgium lost one of the most experienced players - Cathy De Geyter - to a yellow card for a high tackle. From the resulting penalty Germany won a line-out on the Belgian 5m, and with a reduced pack could offer no resistance to the German third try, the pack driving over again and Muriel Weigel getting the try. 24-0.

Cristina Pecoraro scored for Belgium ten minutes before the end, but it was little more than a consolation score for the hosts.

*Overall the tournament highlighted the talent and potential available in European rugby outside the Six Nations, but it remains talent that is unlikely to develop given a lack of playing opportunities. A lot of this comes down to money, but the absence of Six Nations teams from the fixture lists of this second tier of continental women’s rugby is significant. A glance through the rugby history of these countries shows how teams from England, France and Italy in particular used to be regular opponents, but no longer.

If the Six Nations have closed the door on any chance of any other nation joining their closed competition (and they seem to have), do they not at least have a moral responsibility to assist with the development of rugby in the countries they have shut out?

Although British Forces teams such as the Army and Royal Air Force have - to an extent - stepped into the breach, it is hard to see how Netherlands or Germany can develop without the chance to play and learn against the teams that England and France used to enter into this competition.