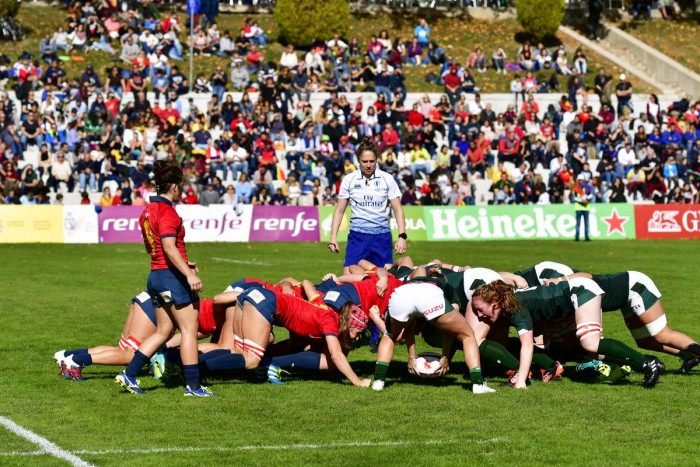 The 4,200 spectators who attended the Estadio Nacional Complutense in Madrid witnessed a dominant performance by José Antonio Barrio's team against Wales.

Wales were captained by Carys Phillips, celebrating her 50th cap, and – with Spain making the same slow start they had on their recent South African tour – had a scoring opportunity as early as the 4th minute came the first opportunity of the Welsh, but a foot in touch just 5m from the line ruled out a chance of an early lead.

After the surviving the first few nervy minutes Spain began to settled down, and began take cotrol of the game, working their way into the Welsh half, patiently going phase by phase until they were on the Welsh five metre line, with Olivia Fresneda finally finding the way through for the first try.

The second score was a near replica of the first, with a strong Spanish defensive line able to keep Wales at bay and force errors before turning defence into attack, but this time it was the speed of wing Bea Dóminguez that broke through. With Patricia García adding the extras Spain went into the break at 12-0.

Wales began the second half like the first, but could still find no way through the Spanish defence. Again the Lionesses moved on the offensive this time it was the forwards who were decisive, with a well-controlled maul took them to the Welsh five metre line where Lourdes Alameda added a third try, taking Spain to 17-0.

The next try came from the Anne Fernández de Corres, who spotted a gap to add the fourth try. 22-0.

With less than five minutes to go Anna Puig added a fifth try, thanks to the support of Iera Echebarría, who beat several defenders following quickly taken penalty stroke on the Welsh 22.

Wales finally got onto the scoresheet from the final play with touching down after a great solo effort.

The final score, 29-5, is Spain’s biggest ever win against Wales, in a series where they now lead 7-2 with one game drawn.